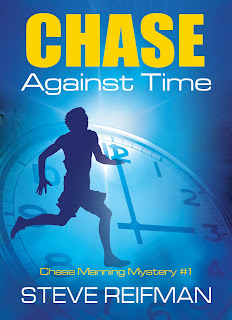 I found the title of this book appealing because I enjoy plays on words. The main character is named Chase and time is of the essence in solving the mystery.

Chase loves music and wants to play in the Sixth Grade Honors orchestra next year, but the school's music  program is in danger because of financial problems. Someone donated a cello once played by Yo-Yo Ma to be auctioned off as a fundraiser, but the cello disappears and, because of the short time available, the principal asks Chase to find out who stole it without letting anyone find out that it's missing.

The short time available and Chase's motivation to save the music program create great tension and this book is a page turner as we root for the likable character and his friends.  The only thing I didn't like was that when the police got involved they didn't take possession of the evidence, but that's a minor technical point and doesn't detract from the excitement of Chase's race against time to solve the mystery. Steve Reidman has written a book lots of kids, including boys who are reluctant readers, will love.
Posted by Janet Ann Collins at 10:53 AM