I don't usually review plays, but this one is worth making an exception for. Recycle! A Children's Musical by Joni Klein-Higger should be performed in schools everywhere. With twenty characters there are enough parts for lots of kids and others can serve behind the scenes. That means a whole class could be involved in the play. 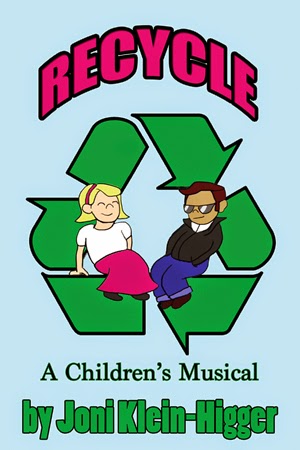 Recycle! is the amusing story of some modern kids who time travel back to 1950 with the help of  a mysterious, "nutty" professor. While there, they learn how people got along without all the plastic and other things that are damaging our environment and come to understand the importance of reducing, reusing, and recycling.

But the play isn't boring and didactic and it could also be performed by groups of kids outside of schools.

It's amusing and has lively, catchy music kids will probably go home singing when the play is over. And performances would be only about half an hour long.

The script is available on Amazon, but the music and recording of it must be purchased from Guardian Angel Publishing, at least right now. I think it will become available elsewhere soon.

Hi Jan, great review of a fun musical (I also reviewed it.) Thanks much, Penny http://penelopeannecole.blospot.com

Jan, so glad you enjoyed my new musical. Love your review:)

Am grateful for your review, as well, Penny Congrats on your new release!

Glad you liked it, Joni. I sure liked your play.