When my father was a boy he was sent to a small town the Appalachian mountains to avoid the epidemic of Spanish Influenza. His little sister was too young to go to school, so my grandparents figured it was safe for her to stay at home.

My father spent a year there living with his grandparents and aunt. She was also his teacher in the one-room schoolhouse he attended.

Finally the epidemic was over and it was considered safe for him to return home. When he left, Aunt Bessie gave him the bell she had used for calling children to class. (Perhaps the school got a new bell on the roof so that one wasn't needed anymore.)

When I was a kid that bell sat on a shelf in our living room and we were not allowed to ring it except once a year. On New Year's Eve my brother and I would be allowed to stay up until midnight, step outside the front door, and take turns ringing the old school bell to welcome in the new year.

I still have the bell, but I no longer use it on New Year's Eve to disturb my neighbors at midnight. At my age I'd rather go to bed. 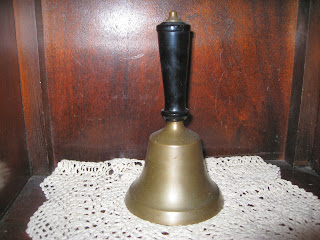