The year 2013 is about one fourth over. Back in January a lot of us made New Year's Resolutions. But did we carry them out?

Frankly, if I made a resolution I can't even remember what it was. Probably I resolved to do something like writing helpful stuff, but that's what I try to do anyway, so that sort of resolution wasn't necessary. Or maybe I resolved not to worry. If that's the case, I certainly failed to keep the resolution because I still tend to worry too much about things. But the year isn't over, so I can still work on that.

What about you? Do you remember what New Year's Resolutions you made? And have you managed to keep them so far?

Maybe this would be a good time to make new ones.
Posted by Janet Ann Collins at 10:37 PM No comments:

Nancy Stewart has done it again.

Like her earlier books, the newest one shows that even kids can make a positive difference in the world. 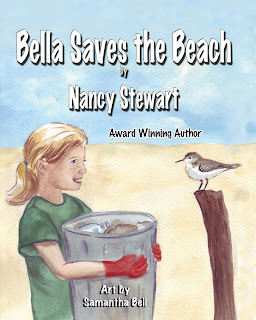 In Bella Saves the Beach the characters from Stewart's award winning book One Pelican at a Time return to tackle another problem with the environment. Even the pelican they rescued from the Gulf oil spill in the previous book appears again and is seen in the charming illustrations by Samantha Bell.

In this new book Bella is disturbed by the trash thrown around on the beach. She and her friend, Britt, try several ways to solve that problem but none of them work. What can they do?

Finally the girls find a way to get others involved and the problem is solved.

After the story ends there's lots of helpful information for young readers about environmental problems and things they can do to make a difference. I think many kids and maybe some adults will be inspired by this book to help make their own worlds better. 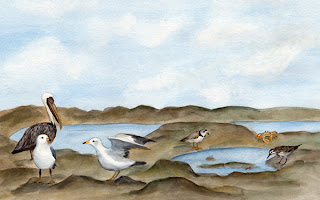 I've only read a couple of Philip Pullman's books and was turned off by his religious bigotry so I never expected to read anything else by him. However last week I was in the library looking for a quick read and saw Two Crafty Criminals: and how they were captured by the Daring Detectives of the New Cut Gang.

Deciding to give the author another chance, I checked it out and, to my surprise, loved it.

Many books for younger readers seem to try too hard to be adventurous, humorous, or both and after a while the attempts become boring. But Pullman's book kept the action believable and the humor was so well done I actually laughed out loud several times.

I assume there will be more books about the New Cut Gang and hope they're as good.
Posted by Janet Ann Collins at 12:20 PM No comments:

I've often thought how strange, and perhaps silly, it is that certain words are considered "bad" while they have synonyms that are socially acceptable. For instance once I couldn't help laughing when I heard someone shout to a man that his mother was a female dog and he wanted to mate with him.

But bad words have a purpose that has been damaged by the frequent use of swearing.

It used to be when people felt angry they would let out that feeling by using vocabulary that made them feel they had broken some rules. Perhaps it warned others that they might express their anger in stronger ways if the situation that angered them continued to escalate.

But when people use that kind of language all the time it no longer has any shock value. Now when they become angry they are likely to 'break a rule' by becoming physically violent.

And physical violence is becoming more and more prevalent in our society.

Sometimes it even leads to murders that might not have happened if the perpetrators hadn't already broken the rules about violence without feeling those were extreme. And if they had felt they were breaking rules by swearing then minor violence might have felt extreme enough to release greater anger.

Of course there have always been killings and other violent acts among human beings, but maybe if swearing were not considered normal conversation by so many people there might be a lot less physical violence.

What do you think of this idea?
Posted by Janet Ann Collins at 10:36 AM 2 comments:

When I was a kid I remember my mother putting on Chanel Number Five to smell nice when she dressed up. Later I would wear perfumes, colognes, or what was actually called toilet water for special occasions. And once in a while my mother would use Air Wik to cover up an unpleasant odor in the house.

But in the late 1970s and early '80s fragrances started showing up -or smelling up - everywhere. From disposable diapers to cleaning products, laundry detergents to all personal care products, scented candles and air fresheners, fragrances have been everywhere ever since.

And that's a big problem.

We had to change churches many times because of my husband's severe allergic reactions to people sitting near him. While my allergies to perfumes are less severe, those smells may trigger my asthma. Even natural fragrances from botanicals can cause reactions in some people with pollen allergies.

And "odor eliminators" don't actually eliminate odors. Instead they make people's noses unable to detect the smells. That can be extremely dangerous for people with severe allergies.

Just about the time when fragrances began showing up in all kinds of products lots of babies were born who turned out to have autism. That condition had previously been rare but more and more kids are being diagnosed with it. Could one of the factors causing autism be exposure to the fragrances?

And what about pollution? Certainly other chemicals are in our atmosphere in greater amounts, but couldn't the ones in fragrances be part of that problem, too?

People who don't use colognes or perfumes often think they're fragrance free, but their noses are so used to the odors in their laundry and personal care products they aren't aware that they smell like those things all the time.

I think if most people switched to unscented products the world would be a safer place.
Posted by Janet Ann Collins at 10:27 AM 2 comments:

If I want to read a book I usually sit down and read the whole thing. If it's too long to finish in one sitting I might spend an hour or two for several days in a row.

But people in book clubs may take weeks or even months to read one book so they can discuss it a chapter or two at a time when they get together.

To me, that sounds BORING.  They might as well be back in school completing homework assignments.

If they do read ahead and finish a book before the group discusses it all (Is that considered cheating?) they're obligated to remember details so they can talk about the selection from it at each meeting.

Yes, it's nice to spend time with other people who like to read the same sort of things but, otherwise, I simply don't see what book clubs accomplish.

In a way a book club might be like a critique group where writers share a chapter of whatever they're working on at each meeting. But a critique group has the practical purpose of members helping each other improve their writing so it's ready to submit for publication, and members get to see each others' work change and improve over time.

And it's not possible to read a book in a day or so that hasn't yet been completely written.

If anyone who reads this belongs to a book club I'd appreciate hearing why.
Posted by Janet Ann Collins at 10:36 AM No comments:

Today is the SCBWI Spring Spirit Conference for people who write for kids. I've gone to dozens of writers' conferences and spoken at quite a few but I never get tired of them.

Writing is a solitary business, but writers are communicators, so when we get together we make friends easily. Both critique groups and conferences allow for that to happen as well as helping us develop our skills and get our work published. Many of my closest friends are people I originally met at gatherings like that.

But writers' conferences aren't the only kind.

Many professions have them for people in the same field. Churches, denominations, and other religious groups have conferences, and so do organizations like Scouts and athletic groups. And there are probably other kinds of conferences I haven't thought of.

Have you ever attended a conference? If you did, what did you like about it? Did it help you?

I'd love to hear about your experiences.
Posted by Janet Ann Collins at 10:31 AM 2 comments:

When I was a kid we were taught the difference between metaphors and similes. When I was an English major in college my professors spent time going over that information again and it was on important exams. As a teacher I've often seen curriculum teaching the same information to kids. And, of course, as a professional writer I'm expected to know that information.

Both of them are used to compare things, but it doesn't really matter if people use 'like' or 'as,' or use other comparisons that leave those words out. It's still obvious that things are being compared.

Lots of grammatical information really does matter. If a sentence doesn't have both a noun and a verb it doesn't communicate the intended information, and confusing adjectives and adverbs can make it obvious that a speaker doesn't know the English language well. It's important for students to have basic knowledge about how our language works.

But I have a big question about the difference between a metaphor and a simile. Why in the world does our education system spend so much time  on such a small distinction? The few people who are fascinated by grammar might consider the difference important, but when it comes to communication between ordinary people, who cares?

Posted by Janet Ann Collins at 8:54 AM No comments: