Lots of people have electric blankets, but I used to have an electric sheet.

When I was a kid we lived in a little cabin in the hills. The original owner had built it himself in 1913 as a summer cabin. It wasn't insulated and only had a gas heater in the living room. It didn't snow where we lived, but the bedrooms still got very cold in the winter.

When my father died my grandfather came to live with us so my mother could get a job and the tiny bedroom at the back of the house became his.

My uncle was an engineer for PG&E and back then they wanted people to use as much electricity as possible. He helped develop a contraption called an electric sheet and gave the prototype to my grandfather. I'm not sure if that was in the late 1940s or early 1950s.

The electric sheet was made of seersucker with zig-zagging wires sewn into it. It couldn't be washed, but was supposed to be placed between the top sheet and blanket so it wouldn't have contact with the skin and would stay clean.

Years later when my grandfather had to go to a nursing home the electric sheet became mine and I used it for about ten years until I got married. By then the thin fabric was dirty (it didn't always stay between the sheet and blanket,) threadbare, and torn.

Of course electric blankets had been invented in the meantime so my husband and I got one and have used those ever since. I'm so glad they can be washed.
Posted by Janet Ann Collins at 10:28 AM No comments:

California is having a major drought and many of our lakes are shrinking and may even go completely dry. That's probably why I was drawn to re-read the book, Gone-Away Lake when I noticed the title in one of my bookcases.

Elizabeth Enright wrote the book back in the 1950s when I was a kid. It's about some children who wander into the woods near their summer home and discover a village of dilapidated old houses next to what is now a swamp, but was once a lake. And the houses aren't completely deserted.

The kids become friends with the aged people who live there, learn a lot about the past, and one of them even has a terrifying encounter with quicksand. The book is fun, educational, and heartwarming.

Of course this story could never happen today; children are not allowed to go outside without adult supervision (in some places allowing that is considered child abuse) and they certainly wouldn't talk to strangers or wander off alone into the woods.

But it's not impossible that summer cabins on the shores of lakes that dry up may become deserted and dilapidated. I hope our lakes don't become gone-away.

Not All Americans Are Racist 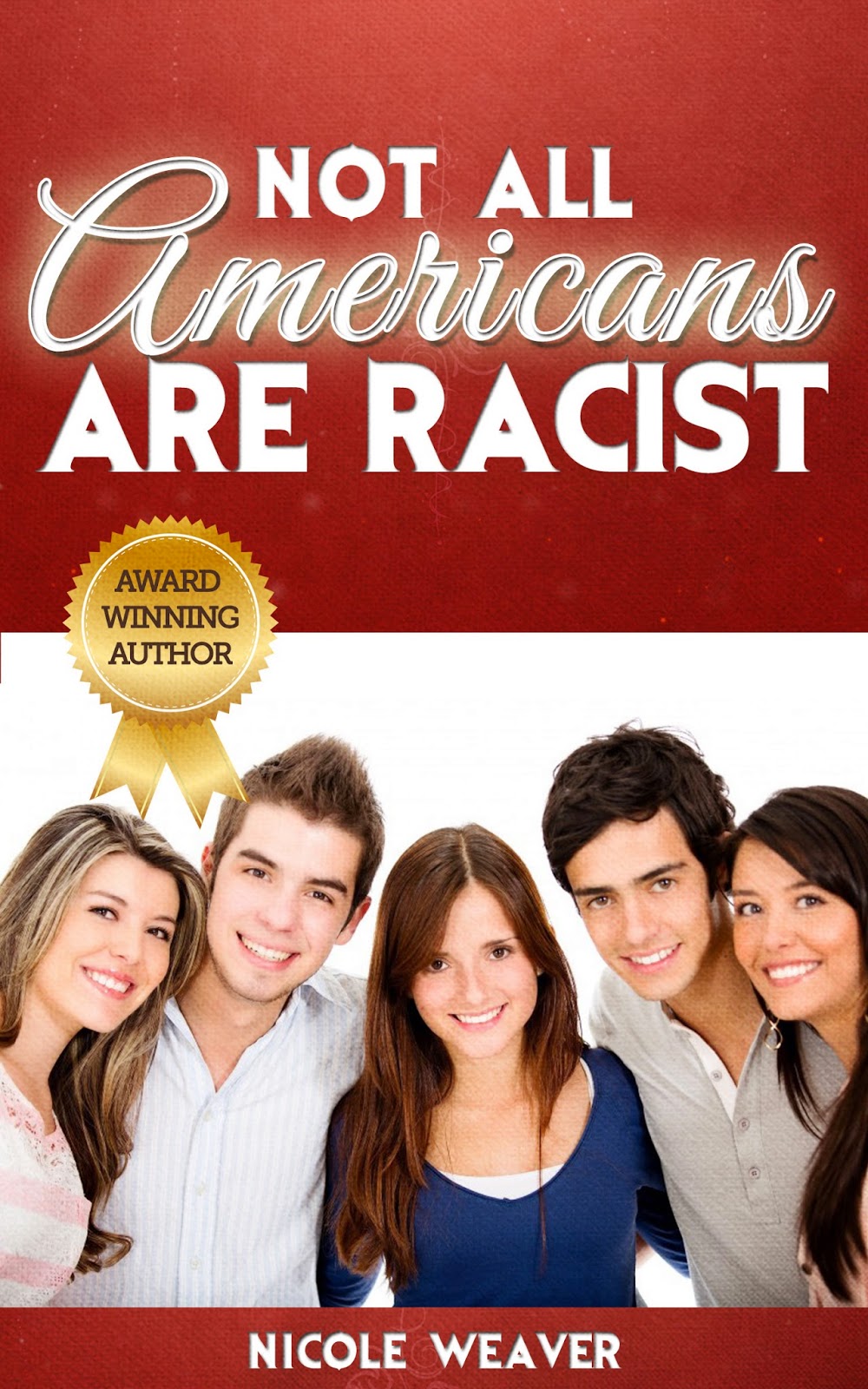 This Young Adult book by Nicole Weaver is heart wrenching. It tells of her experiences with prejudice as a young immigrant from Haiti through her adulthood and I was shocked to learn of the things she experienced long after the Civil Rights Movement.

But the book is hopeful, and by making young people aware of the problems I hope it will encourage them to make a positive difference in the world by helping to eliminate racial discrimination.

Weaver is a teacher, and the questions for discussion and to write about at the end of the book would be excellent for use in classrooms, or by homeschooled students.

I hope Not All Americans Are Racist helps bring us to a time when not any Americans are racist.

Labels: Book review, Nicole Weaver, Not All Americans Are Racist, YA 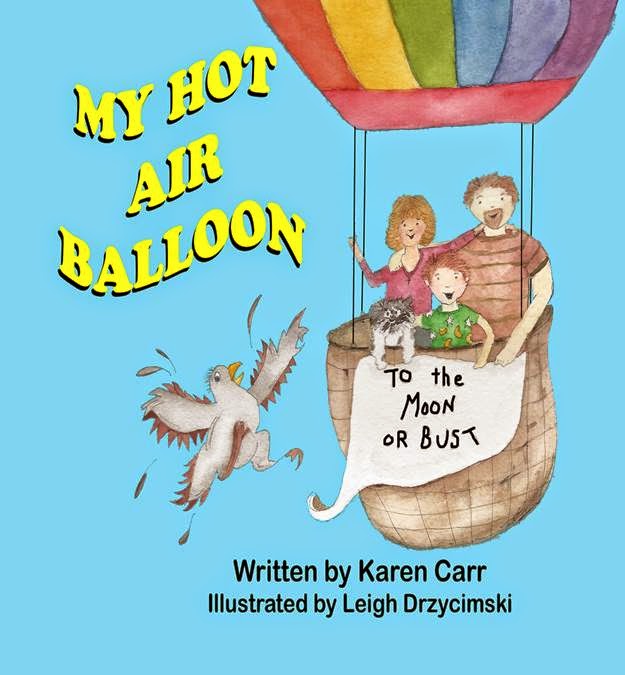 This book by Karen Karr would make a wonderful bedtime story for little kids.

It's imaginative and has just enough soothing repetition.

I love the way the kid in the story imagines floating in the sky and seeing everything from up there. In fact, maybe I shouldn't admit it, but it makes me want to go up in a hot air balloon myself, and I'm a grown-up!

The author briefly mentions that God created everything seen from the sky, but the book isn't at all teachy-preachy.

And the illustrations by Leigh Drzycimski capture the mood of the story perfectly.

My Hot Air Balloon is definitely a good picture book.

Posted by Janet Ann Collins at 10:32 AM No comments:

The Child Who Changed My Life

Like all new residents, I spent my first week at the home in the unit with little kids and bedridden children. One of the little ones was a girl named Gladys. She had big, blue eyes and curly hair and an impish smile.

I only knew her for that one week, but she changed my life forever.

Gladys was deaf. She was born with no fingers on one hand and was six months old when her parents discovered she was deaf. They brought her to the convalescent home and were never heard from again.

Back then schools didn't allow deaf kids to use Sign Language. The theory was they'd be motivated to speak and read lips if they couldn't sign.

But, when the teacher and nurses weren't looking, Gladys and I communicated with gestures, expressions, and body language. She was full of mischief and I enjoyed her company.

I was in another unit for five weeks before going home and never saw Gladys again.

But because of her in High School I volunteered with a program for "handicapped" children and spent a lot of time with a boy who was deaf. (He and I also secretly used gestures to communicate.)

Because of Gladys, in college when I was given an alphabet card I practiced fingerspelling until I could remember how to do it.

Because of Gladys I learned American Sign Language, worked at California School for the Deaf for years, married a Sign Language interpreter and interpreted in several churches, and raised three Deaf foster sons with Special Needs.

I would LOVE to find Gladys again (she'd be in her 60s now) and let her know how she changed my life.

I keep a few books made up of short things that can be read quickly. I take those with me to doctors' offices and other places where I expect to wait because I won't have to put them down in the middle of an interesting section when I'm called in for my appointment.

Recently, while waiting for a blood test, I was reading Richard Lederer's book, The Revenge of Anguished English. And I was silently laughing so much tears were running down my face and the receptionist asked if I was okay.

I was more than okay, I was having a wonderful time!

If you like slapstick or risque humor, Lederer's books probably won't strike you as funny as they do me, but I love language jokes and puns, so Lederer's books are my favorite kind of humor. The bun may be the lowest form of wheat, but I consider the pun to be the highest form of wit.

I'd read this book before, but pull it out to re-read every few years and it always makes me laugh.

And, since laughter is good medicine, maybe all doctors should keep copies of it in their waiting rooms.
Posted by Janet Ann Collins at 10:30 AM No comments:

I've attended two writers Conferences in the last few weeks and enjoyed both of them a lot.

Writing is a solitary business, but writers are communicators, so we tend to click when we get together. Many of my closest friends are people I originally met at writers conferences.

On Saturday, April 11 I'll be participating in a group book signing with other authors. While signings are on a much smaller scale than conferences and we don't have much time to share with each other, this is another way to be with other writers.

And most of the people who attend love books, so we have a lot in common with each other, too.

This signing will be in Auburn, CA at what is now called the General Gomez Art Center. That recently renovated facility at 808 Lincoln Way was previously the Placer Arts Center.

There will be a lot going on and I hope lots of people I know who live nearby will be able to join us.

It should be fun!
Posted by Janet Ann Collins at 10:33 AM No comments:

Easter is always the first Sunday after the first new moon in Spring.

Tomorrow will be Easter Sunday and I'm already enjoying all the beautiful Spring colors. Trees are blossoming and flowers have been blooming for weeks here in California.

Yes, I know we desperately need rain and some is predicted for Easter Sunday. We'll celebrate if that happens.

And even if kids can't be outside for Easter egg hunts, people will be wearing lovely colors to church.

I notice colors more than most people do.

Whenever I've had one of those eye tests for color vision where numbers and letters are mixed in with little dots I've always gotten 100% correct.

Since my color vision is so strong I probably get more pleasure from colors than most people do. And, wet or dry, feasting my eyes on the colors will be just one more thing to add to the joy of the holiday.
Posted by Janet Ann Collins at 10:34 AM 2 comments:

Have you heard the latest news about the drought in California? It's the worst in recorded history!

It will soon be illegal for anyone in the state to shower or bathe more than once a week, flush the toilet more than twice a day, or water lawns or flower gardens at all. Slight exceptions will be made for plants that produce fruits or vegetables. Outer clothing will have to be worn at least twice before laundering.

Strict fines will be imposed for people not obeying these new regulations.

The regulations aren't nearly that strict ... at least not yet.

But except for watering plants, most of those artificial regulations are pretty much the way people lived in the past. Outhouses didn't need to be flushed, people often wore the same clothes for a week except for their "Sunday best" and, as I mentioned before, bathing once a week was the norm.

I hope we don't get to the point where we actually have regulations like the artificial ones I mentioned. And that will be less likely if everyone in our state tries to limit water usage as much as possible.
Posted by Janet Ann Collins at 10:25 AM No comments: