In the America every year on the Fourth of July we celebrate Independence Day.

According to my old Webster dictionary the word, independence, means "freedom from the influence, control, or determination of another or others."

In 1776 the newly formed United States of America declared their independence from the rule and control of England.

But, since the world has become increasingly connected by technological advances in recent years, we are certainly influenced by things that happen outside of our own borders even though the government and individual people of our nation are free to make choices without being controlled by other countries.

Influence isn't the same as control and influence can be a good thing.

We hope someday everyone on our planet will be allowed life, liberty, and the pursuit of happiness. But we don't have the right to force our values on others.

We disagree about lots of things, but if each of us lives with integrity, compassion, and the common sense to know we're not the most important person in the Universe I believe we can be a positive influence on others, who will influence still others. Influence can spread in a good way until the world becomes a better place.

It's a small world after all.
Posted by Janet Ann Collins at 10:28 AM No comments:

Back in the olden days when I was a kid Summer was a time of freedom.

We would go to the local Fourth of July Fair and later shoot off firecrackers and have our own fireworks like sparklers and Roman Candles when it got dark.

At other times we might go on an overnight camping trip with the Girl Scouts or our family would go to Yosemite National Park and stay in a tent cabin. Our family couldn't afford expensive vacations, but we'd often drive up to Camp Taylor in rural Marin County for a picnic and play in the creek.

When I got older I usually went to Church Camp for a week.

But most of our childhood Summer Vacations were spent playing outside and having fun with no adults around. With permission from our parents we might go up the hill for a hike. We'd play with squirt guns or wade in the creek and get wet. Sometimes we'd put on a show for our neighbors. And we always used our imaginations to play pretend games.

Once in a while we might even pay to go to the town swimming pool or see a movie.

But the most fun for me in the Summer was performing in Marin Junior Theater. I was always a good girl, but I'd usually get the part of somebody evil in the plays, and enjoyed that a lot. And we even got to be on the new Television channel to advertise our productions.

What do you remember about childhood summers?

Has Anyone Seen Jessica Jenkins?

What a fun book this one is!

Jessica discovers she has the ability to become invisible. But then she finds out certain other kids who she doesn't especially like also have super powers.

And something evil is going on.

Eventually Jessica and her best friend manage to join forces with those kids to combat the evil. And, as the tension grows, others kids she knows also develop super powers.

But they're still only kids, they have to keep their powers secret, and the potential for something terrible happening if they fail is huge.

Can they stop the bad guy?

In Has Anyone Seen Jessica Jenkins Liz Keller has written an exciting, believable book and kids who read it will certainly identify with the characters. (Of course readers will wish for super powers of their own, too.)

I was surprised to learn that the author lives in England, because the story could happen in America and there weren't any differences in the school setting or terminology.

Kids who live anywhere in the world will be able to identify with the characters and enjoy the book - a lot.


No, that title isn't a make of car. It's how I feel about certain commercials.

When my mother was a girl kids in all the California schools sang the state anthem every morning. She taught it to me when I was a kid.

A couple of years ago I was furious when the anthem showed up as part of a TV commercial. I called the company and complained and they told me they'd gotten similar complaints from other people. Soon afterwards those commercials disappeared from television, which made me feel better.

But now they've showed up again with the only difference being that a different verse of the state anthem is used. Even though only the first verse was sung in our schools, that still makes me angry.

I wish hundreds of people would contact the Jeep manufacturers, tell them they find the commercials offensive, and refuse to buy their cars.

And, if the commercials in other states are similar, I hope people will complain about those, too.

If you want to know the California State Anthem, here's a link:
http://www.50states.com/songs/calif.htm#.VYCKv-vlkng

The picture book, Her Brown Hair, is called a companion piece to Her Pink Hair which is by the same author.
I reviewed that book here:
http://onwordsblog.blogspot.com/2015/01/her-pink-hair.html

But Jill Dana's newest book isn't necessarily about a cancer patient. It's about a child in the hospital and her illness isn't specified, although it could be cancer.

Her friends visit her, both at home and in the hospital, and do things to show their affection for her.

This book will help young kids understand others with serious illnesses and perhaps give them some ideas about how to help those friends. It would also make a great gift for children who have cancer or another medical condition because it would help them realize they're not alone and that other kids have experienced similar things.

The language is very simple so young children can comprehend it easily.

The illustrations are all clay figures made by the author and I found them delightful. Perhaps seeing them might inspire young readers to make gifts of clay for their friends with medical problems.

I think this book will be helpful to lots of kids; both those with serious health problems and those who care about them.
Posted by Janet Ann Collins at 10:20 AM 9 comments:

Helping With a Problem 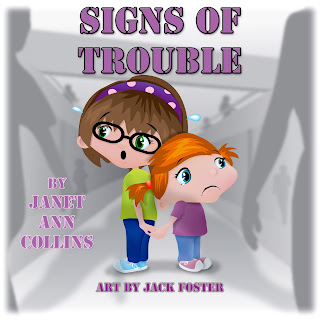 I don't often blog about my own books, but this one is special to me and I'd love to have more people read it because it might help kids with special needs.

Kids with any kind of special needs tend to get ignored or bullied in school.

I've cared about children like that since I was a child myself when I was sent to a convalescent home because of my asthma and met lots of kids with various disabilities. (Yes, I know that term isn't politically correct anymore but I was a child long ago.)

I wrote Signs of Trouble to help today's children understand what it's like to have a learning disability and, hopefully, to realize that kids who have special needs aren't necessarily very different from everyone else.

Since the kids in the book use what they've learned about safety rules to solve their problem, all youngsters can benefit from that reminder.

At the end of the book I included suggestions for parents and teachers to help children learn how to be safe and to understand others who have learning disabilities.

I hope that book will make a positive difference by doing that.

The Cottage in the Woods

This book is spectacularly wonderful!

Katherine Coville has written a novel that uses the concept of a famous fairy tale (Goldilocks and the Three Besrs) and changes it completely. Some twists include reminders of other fairy tales and even hints of some adult classics.

The point of view character is a bear, and she must deal with all kinds of exciting characters, magic, and plot twists.

The only problem with the book is that it's supposed to be for young readers, but it's long (389 pages) and has some violence and romance, so it probably wouldn't be suitable for kids younger than nine or ten years old.

Young Adults would probably love it, but the fairy tale aspects might make them hesitant to pick it up. If they do read it, they'll be glad they did.

The Cottage in the Woods is exciting, creative, and unique.

I'm very impressed and hope Katherine Coville will write more books in the future. She certainly has me for a fan.

Labels: Book review, books for kids, Katherine Coville, The Cottage in the Woods

I've enjoyed and reviewed other  books in this series, so I was eager to read the newest book about Magical Mea. It's called Magical Mea Goes to School.

In a previous book Mea learned to use her magical ability to help people instead of to play mean tricks on them.

Now school has started and Mea's brother Matthew, who outgrew his own magical ability, wants to help his little sister learn to use her powers wisely.

But Mea avoids him by keeping busy away from him. She wants to do things her own way.

Can she learn to use her power and help people without getting caught?

This early chapter book by Penelope Cole will be enjoyed by young readers with active imaginations. And the colorful illustrations by Kevin Scott Collier add a lot to the pleasure of reading it.