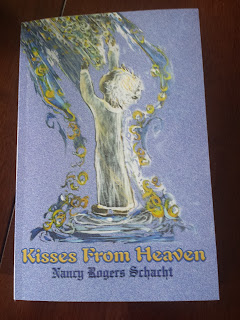 Do you remember seeing signs, T Shirts and jewelry with the letters, WWJD a few decades ago?
Those letters stood for the phrase, What Would Jesus Do?

At the time I was a substitute teacher and sometimes worked with kids in Middle School. I wondered how Jesus might have acted if he'd been a kid in an environment like that.

Later that question inspired me to write my first published book, The Peril of the Sinister Scientist.
It's about a boy in Middle School who wants to act like Jesus.

I needed a strong motivation for him, and thought of one: the boy thinks he might be a clone of Jesus Christ because a scientist who worked on an experiment to clone Jesus is stalking him.

The book is with a small publishing house, and the publisher hurried it into publication ahead of schedule so I would be able to participate in a group book signing. Unfortunately, because of the rush, the kid on the cover doesn't look like the main character in the book.

The book was published in 2009 but it's still available on Amazon
(Here's the link: http://tinyurl.com/hbdhtuu ) and bookstores can order it through their distributors. 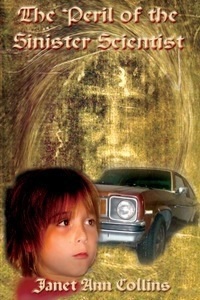 Labels: My First Book, The Peril of the Sinister Scientist, writing, WWJD

Way back in January lots of people made New Year's resolutions. Did you?

I didn't because I knew I probably wouldn't keep them. By this time I would probably have forgotten all about them anyway. New Year's resolutions are pretty much futile for me.

But what about making seasonal resolutions?

Okay, I can do that.

For this season I resolve to make a new address book, since my old one is overflowing. And I resolve to pick and preserve lots of fruit from my yard.

What do you plan to accomplish this Summer?

And what do you think of making seasonal resolutions instead of annual New Year's ones?

I've written quite a few posts about my grandfather so I think this will be the last one, at least for a while.

He often told us about experiencing the San Francisco 1906 earthquake and fire.

Since their homes were destroyed, people camped out in parks.

My grandfather and his daughter stayed in the Jewish Cemetery (now Dolores Park) and had only a carpet hung on the fence as shelter.  My very pregnant grandmother was graciously invited to stay with a woman in a nearby house that hadn't burned.

Then my grandfather discovered that his parents' home a few blocks away at Market and Dolores streets had been spared, so the family went to stay with them.

My great-grandfather was a butcher at the slaughter house on Potrero Hill. He walked up to his place of work and pushed a wheelbarrow loaded with a side of beef all the way down to the cemetery, where he cut it up and gave meat to the hungry people still camping there.

The water mains were broken, so the only way people in the area could get water was to walk to the hill above Market Street where the US Treasury was, and fill whatever containers they had from the spring. The line was usually a mile long.

A few days after the quake (I guess the fire was no longer a danger) my grandfather decided to walk down to the Wells Fargo building and see what had happened to the place where he worked. In every block someone in the militia stopped him at gunpoint and forced him to spend an hour picking up bricks and other debris. It took him eighteen hours to walk down and back and he was never that tired at any other time in his life.

I was born in New Jersey, and came to California when I was four years old. When I got married and we moved to a victorian flat in the mission district my aunt told me, "You're just like a salmon coming home to spawn."

A few years ago I discovered I had moved to the SAME BLOCK where my grandparents had lived at the time of the earthquake! The fire that destroyed my grandparents' home had stopped on the other side of the street. (I didn't actually "spawn" while we lived there, but we did get our first two foster kids.)
Posted by Janet Ann Collins at 10:30 AM 2 comments: 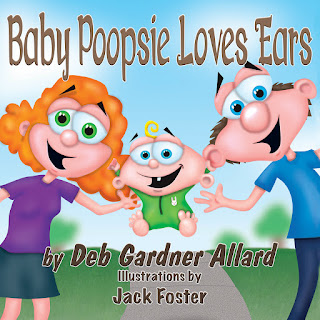 Baby Poopsie Loves Ears by Deb Gardner Allard is a book that's just right for little kids with a baby sister or brother.

I can imagine those children laughing at the story and comparing it to the actions of the babies in their own families.

And they'll giggle at the funny, colorful illustrations by Jack Foster, too.

It would be a great gift for children at a baby shower for the new babies in their families.
Posted by Janet Ann Collins at 10:30 AM 4 comments:

More About My Grandfather

Back in the 1800s most people finished their educations when they graduated from the Eighth Grade. If they were wealthy they might go on to college, but most boys entered the workforce and my grandfather was no exception.

He went to work as a shotgun guard on the wagons that carried gold bullion from the trains to the mint in San Francisco for Wells Fargo Railway Express.

Legally you had to be 16 years old to have a job that involved carrying a gun. Because he was tall my grandfather was able to pass for 16. He always said he had told the only lie of his lifetime to get that job.

That, in itself was a lie. For instance he thought it was shameful that my mother told me babies grew inside their mothers' tummies. He thought she should have said they were found in cabbage patches or brought by storks. Lying "for the protection of the innocent' was okay in his opinion.

As an employee of Wells Fargo Railway Express grandfather ate in the lunch room and often heard the detective who caught the bandit, Black Bart, tell visitors how he had done that by tracing a shirt cuff found at the scene of a hold-up by the laundry mark printed on it to the place the bad guy had his clothes washed.

Another advantage of working for that company was being able to ride the trains for free.

My grandfather's younger brother was sent to a tuberculosis sanitarium in the Sierras and nobody else in the family ever saw him again, But my grandfather took the train up to visit every few weeks until his brother died.

While on the long train rides he taught himself to play the five-stringed banjo.
Posted by Janet Ann Collins at 10:28 AM 2 comments: 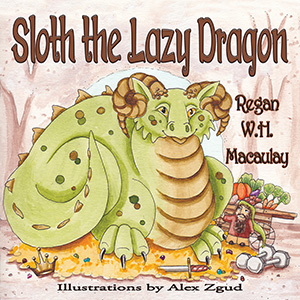 Sloth is a gigantic dragon who spends his time sitting on a pile of treasures.

But he's very fat, although that word isn't used in the book. In fact he's so overweight he can't even fly.

Then a dwarf named Radish offers to help him so the dragon won't frighten him and the other dwarves and Sloth accepts the offer.

This book by Regan W. H. Macaulay will be an encouragement for kids to eat a healthy diet and stay active so, eventually, they can stretch their wings and fly like the dragon in the story.

And I won't give away what happens to the treasure.

Posted by Janet Ann Collins at 10:31 AM No comments:

Lots of us who love to read enjoy science fiction.

Back in the 1800s when my grandfather was young that genre was becoming popular. My Grandfather enjoyed reading books like those written by Jules Vern.

That's probably what prompted him to try what we might call a prank.

He lived in the Mission District of San Francisco. One night, with help from one of his younger brothers, he lit a lantern, tied it to the tail of a kite, and flew it into the air.

People all over the area came out and stared at the mysterious light moving in the sky! They'd never seen anything like it before. Could it be something from outer space?

Years later, when I was a kid, he still bragged about the commotion he'd caused.
Posted by Janet Ann Collins at 10:28 AM 1 comment:

A Rainbow of Friendship

Anyone who reads my blog posts often knows I want to help people accept others who are different from themselves.

A Rainbow of Friendship by Joni Klein-Higger is a book that does exactly that.


Its about a girl who lives where everything - and everyone - is the same. Then she discovers a rainbow world with kids of all different colors.

At first she's afraid, but she has fun with the other children and learns that, while it's important that everyone is unique, together we make something beautiful.

Of course the illustrations by Eileen Goldenberg are bright and colorful.

The text rhymes nicely and I imagined it becoming the lyrics to a song. Then I discovered the author has written and recorded music called Friendship to go with it that's available on i-tunes.

Kids could sing along in their classrooms or at home!

But, even without music, I'm sure teachers will want to use this book to teach their students to accept each other. And parents will want to read it to their own kids, too.