As we begin a new year on Friday I've been thinking about numbers.

We once had a dog that could count to five but anything more than that was just a lot. Probably since dogs have four feet and a tail the number, five, made sense to her.

I wonder when people first invented numbers. That must have been very early in our existence.

Since we have ten fingers it makes sense to have our mathematics based on the number, ten.

Long ago a mathematician named Edward Kasner coined the word, googol, to mean the number one followed by 100 zeros. In my youth I heard that term used to represent one number less than infinity, but that wasn't an accurate use of the term.

Then the internet company changed the spelling of that word to become Google. Of course you know what that is.

And lots of people thought the world would end in the year, 2000.  Obviously they were wrong.

Are you tuckered out yet?

I've been involved in two family Christmas dinners at my house, a visit to a distant relative, a church service, and there's one more family gathering I'll be attending today. Some friends will be visiting me later this week, and then I'll need to take down all the decorations and put them away. Writing thank-you notes will take up some time, too.

I absolutely love seeing so many people I love, and all the Christmas activities invigorate me, but I'll probably be exhausted when the holidays are over.

How about you?
Posted by Janet Ann Collins at 10:25 AM No comments:

The Presence of Presents

The word, present, means to be in a certain place. For example, a student may be marked as present by a teacher, who marks the presence or absence of each student in the class.

As a verb, present (emphasis on the second syllable,) means to put something in a certain place. Perhaps someone might present a gift to another person.

And the thing that was presented would be considered a present.

During the holiday season we present a lot of presents to people.

I don't know about you, but my favorite part of the holiday isn't the presents I get, but the presence of people I love. And it makes me happy when they appreciate the presents I present to them.

Of course at this time of the year Christians celebrate that we were presented with the present of the presence of God. Now that's something to appreciate.

Posted by Janet Ann Collins at 10:34 AM No comments:

With all the Christmas music everywhere I remembered the song, Toy Land, about childhood. It includes a line saying, "Once you've crossed its borders you can never return again."

At this time of year a lot of us remember Christmases when we were little kids. Of course we can't go back to our childhoods again, but we can certainly enjoy our memories. And, especially for those of us who are parents or grandparents, we can get great pleasure from seeing children enjoy the wonders of the holiday season.

And, I probably shouldn't admit it, but I'm still a kid on the inside in many ways. I often use my imagination, which is probably one reason why I'm a writer. I enjoy reading books for kids and traveling to other worlds and cultures in my mind.

And I hope I never get over enjoying the holidays, especially seeing people I love and giving pleasure to them.

Yes, Christmas is a religious holiday and that's important. But isn't Christianity about love and giving?

I hope I can always enjoy everything about this season with the eyes of a child.

Posted by Janet Ann Collins at 10:25 AM No comments:

I don't often blog about my own writing, but I want to share that I've had several things published lately.

Most recent is a story in the newly released anthology, Inspire Forgiveness. I participated in a book launch event fot that book this week. I was please to discover that my story is the first one in that anthology, and to learn that the first and last ones are chosen because they should be expecially inspiring to readers.

I've also had several articles in a Nevada County newspaper, The Union, recently.

I write fiction for kids and non-fiction for adults, but haven't had any new books for children published lately. Since the already published ones are still available, I'm hoping some people will choose to give them to kids for Christmas.

You can learn more about those at http://www.janetanncollins.com.
Posted by Janet Ann Collins at 10:27 AM No comments: 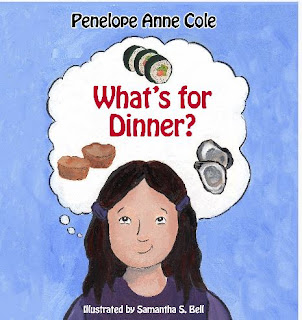 I've read several books by Penelope Anne Cole, but this one is different from the others.

It's apparently based on real events her daughter, Katy, experienced since the main character has that name. And, judging by her photo, Samantha Bell made the illustrations of the girl's mother resemble the author.

The story is about Katy's invitation to have dinner with a friend from Nigeria. Katy wonders what kind of food she'll have to eat.  Will it be something gross?

The book mentions foods from many different cultures, and at the end the main course served by the host family is quite a surprise.

What's For Dinner? is both fun and educational. At the end it includes some recipes and links to help readers learn more about the foods in various countries.

And I believe this book will do something I think is very important: help kids learn to accept people who are different.
Posted by Janet Ann Collins at 10:27 AM 2 comments:

It isn't likely that a monkey would escape from a zoo in real life, but in Mokey's New Friends, Mokey the Monkey's escape sets the premise for a great story.

Mokey is a cute little monkey and, as he explores the world outside of his usual environment (the zoo,) he makes some interesting new friends.

First he gets to know a donkey, and then a squirrel. Both of them are different from the monkey in many ways, but they cooperate and have fun together.

Anyone who often reads my posts knows I care a lot about helping kids accept others who are different, and Connie Arnold does exactly that in this book. I hope as a result of enjoying this warm and cheerful story, lots of children who read it or hear it read will consider making friends with kids who are different from themselves. I believe that will probably happen.

The bright and creative illustrations by Marina Movshina will add to the children's enjoyment of the book.

It feels like Winter where I live. We've had quite a bit of rain and even a little snow. (Of course we're hoping for a lot more to end the drought in California.)

But, according to the calendars,  Winter won't actually begin until December 22nd.

My etymological dictionary, says the word, winter, is related to the words for wet, and water. In the Northern Hemisphere that's certainly appropriate.

But what about people who live down under in places like Australia or Brazil.  Do they still call this time of year Winter?

It seems like they should have opposite terms for the seasons since their climate is opposite of ours in the Northern Hemisphere.

I guess since people from Europe settled into those continents hundreds of years ago those people kept the languages and terms they were used to. But what did (or do) the original peoples in those areas call the seasons?

Anybody know?
Posted by Janet Ann Collins at 10:28 AM No comments:

Back in the olden days, when I was a kid, the majority of dogs were named Blackie, Brownie, or Rover. (Since leash laws didn't exist dogs were free to rove around their neighborhoods.)

One mean little scottie dog was named Dewey after a presidential candidate. He (the dog, not the candidate) would chase us, barking ferociously and all the kids on our street were afraid of him. But one day I got fed up with the dog chasing us so I yelled angrily and ran towards him instead of away. The dog yelped, took off running, and never bothered me again.

Today most of the dogs in my neighborhood have human names. For some reason, Molly, Bella, and Buster seem to be the most common. Cookie and Biscuit are also popular. Since we live in gold country one neighbor was creative when she named her dog Clementine.

But there are a few other creative dog names in my neighborhood, such at Tika, Moto, and Shouka. That last one was named after a whale with similar coloring.

My dog is called Suds and I consider that unusual. She's a white poodle/bischon-frise mix with curly white hair. When she's clean (which never lasts long due to the dirt in our yard) her hair looks like soap suds.

If you or your neighbors have dogs, what are the pets' names?
Posted by Janet Ann Collins at 10:36 AM 2 comments: