With all the disagreement going on in the world about politics, religion and just about everything else, it's nice to know there's one thing everyone agrees on.

What is that? you may ask.

Money is only bits of paper or metal or even references to those things. The only reason it has any value at all is because everybody agrees that it has.

Even the gold standard only worked because everyone agreed that gold was valuable.

You can't eat it, cook with it, build houses or make clothes with it, but it is pretty and rare.

Money isn't even pretty or rare, though most people would like to have more of it.

All of us work for it, trade it for things we want or need, or hoard it.

It would be interesting to see what the world would be like if money didn't exist.

Maybe there are creatures on planets in other galaxies who have advanced societies without money. (Okay, my writerly imagination is coming into play here.)

But here and now, we can be grateful that at least there is one thing we can agree about.
Posted by Janet Ann Collins at 10:31 AM No comments:

I've blogged about my early experiences with computers before, but here's something else about computer history.

Today I looked up the word, computer, in my old dictionary that I used in college. (I still keep it because it tells about the history, not only the definitions of words.)

That edition of the dictionary was published in 1958 and the word, computer, wasn't even in it!

Wow! The world has certainly changed a lot since then.

I think it was in the 1960s that we began hearing about those things. The early ones were gigantic, about the size of refrigerators. And they only existed in a few science laboratories.

Rumors began spreading about those strange contraptions, which seemed like something out of science fiction. Like many people, I found the concept a little scary. There were even rumors that someday computers might take over the world!

Well, that's one prediction that has certainly come true.

Since I wasn't a scientist I didn't know exactly what those huge, early computers could do, but it was only the tiniest fraction of what even tiny cellphones can do today.

Of course my writerly imagination still wonders if they might someday be used for some sort of mind control or other world dominance.

But, in the meantime, it's hard to imagine what we would do without them. I'm certainly grateful for mine.
Posted by Janet Ann Collins at 11:12 AM No comments:

I'm preparing for a big change in my life.

Since my income will go down in a few years I've decided to go back to operating a preschool in my home, as I did years ago. I no longer live in the same community, but I'll use the same name for it, Happy Hands.

I'm not as young as I used to be, so this Happy Hands will be mornings only, but I think there are stay-at-home parents and grandparents who would enjoy a break from childcare while their kids or grand kids benefit from learning.

Besides operating my own family daycare home, I also taught in several preschools, so I have lots of experience.

And I love working with young children!

But the requirements are much stricter and more complex than they used to be, so it will be several months before I'm licensed and ready to start advertising Happy Hands.

I let my hair grow for over three years so it would be long enough to get cut off and make wigs for cancer patients.

If I let it hang loose it was driving me crazy getting in my face. In a ponytail it bumped against the backrest in my car. And I was constantly yanking out snarls.

This week I decided it was long enough, and got it cut short.

Ahh, it feels so much better!

But, to my surprise, the only places that accept grey hair for wigs make them for children with various conditions that cause hair loss, not only cancer.  I asked why places that make wigs for adults don't accept grey hair and was told adults who want wigs are more fussy and want to be sure the ones they get aren't died.

But don't people with grey hair ever need wigs?

I don't understand, but I hope my hair donation will help improve the life of some kid.

Here are the before and after photos my neighbors took for me: 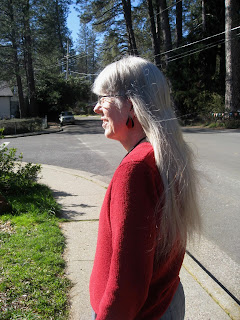 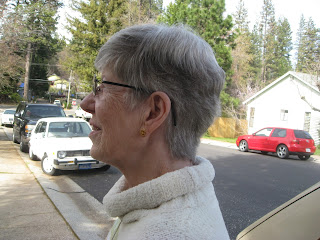 This book starts out like a fantasy. Martin and Julio expect to find doughnuts and cupcakes growing on trees when their parents take them to the Dessert Garden the next day.

But the garden is real, and the kids discover all kinds of delicious fruits growing there, and some healthy desserts made from them.

This charming picture book is both fun and educational. It will help motivate kids to appreciate eating healthy food instead of junk food. And they'll learn something about Latino culture and a few words in Spanish in the process.

I hope lots of kids get to enjoy and learn from The Dessert Garden.
Posted by Janet Ann Collins at 10:32 AM No comments:

Back in the 1940s and '50s there were no preschools. Some rich families sent their kids to "nursery schools," but those were not common.

And Kindergartens weren't required, so lots of children started First Grade without any previous school experience. Many churches included five year old children in their nurseries, so those kids hadn't even had experience in Sunday School.

Even after Kindergarten did become required, most of them were only for half days. Since most children had stay-at-home moms, five year old kids would be at home the rest of the time.

Today there are far more mothers with full time jobs than stay-at-home moms. Kindergartens start and stop at the same time as the older grades, and thousands of children go to after school programs in the afternoons.

I used to be a substitute teacher and noticed that children who hadn't been to preschool were at a great disadvantage when starting Kindergarten. Many of them had missed learning basic skills like the alphabet, counting, and writing their names, and they hadn't leaned how to function as part of a group. It took them some time to learn to raise their hands and wait to be called on, walk in a line, sit quietly at their desks, take turns, etc.

Preschools are great for kids.
Posted by Janet Ann Collins at 10:33 AM No comments:

When I was a kid the small town where we lived had a branch of the county library in what had previously been a bar. My father took me there to get my first library card when I was in First Grade.

After he died my mother had to get a job. Since I had severe asthma I couldn't climb the hill to our house, so every day after school I'd hang out at the library until my mother picked me up on her way home from work.

The librarian taught me the Dewey Decimal System and let me help her by shelving books. In return I always got to be the first kid to read the newest books for kids.

A few years ago the county where I now live considered selling the libraries to a private company. The entire community came out in protest, so they kept the free, public libraries.

Now the libraries use computers instead of cards to check books out, and file card catalogs are obsolete. Some people come to the library to use computers with internet access, and the main county library even has a 3D printer and classes in technology.

Things have changed a lot since I was a kid!

But little kids can still come to Story Time, and people are constantly coming in to check out or return the old fashioned, hard copy books they enjoy reading.

I hope libraries never go away.
Posted by Janet Ann Collins at 10:32 AM No comments:

In the 1970s if I'd seen someone walking around alone and talking out loud I'd have assumed he or she was mentally ill. Today I see people doing that all the time.

As a kid I wouldn't have guessed people would be able to do all the things technology allows us to do today.

And who knows what the future may bring?

Mechanical arms are becoming available for people who can't use their usual arms because of a special need. I predict one day we'll have brain implants that let us plug a third arm into a shoulder whenever we could use an extra hand.

I heard on the radio (Yes, I still listen to one of those old fashioned things) that kids are suffering because their parents are always using their tech devices instead of interacting with their children.

And we've probably all heard that it's bad for kids to use their own phones, etc. as much as they do.

My writerly imagination makes me wonder if one day the government will require everyone to use devices, or even brain implants, that let them track us all the time.

I love that I can communicate with people all over the world and have connected with some I hadn't had contact with in years through the internet.

I spend lots of time on my computer every day and, since I did terribly in my school typing class, I probably couldn't have become a published writer without modern technology.

But there can be too much of a good thing. Sometimes we just need to set limits.
Posted by Janet Ann Collins at 10:28 AM No comments:

Liam, the main character in Cosmic, is like any other kid except that he looks like an adult. That enables him to become the chaperone for a bunch of kids on a secret space flight.

The book is nearly half over before the kids actually get sent into space, but it's an adventure from the very beginning.

Kid who read this book will have to wonder what it would be like to look like an adult and have to act like one to convince real adults they're one of them.

And the interactions between the kids are realistic.  The author, Frank Cottrell Bouce, obviously knows kids.

And when Liam manages to become the chaperone, that's only the beginning of the adventure. Due to some errors, the kids might never get back to Earth, and the trip is secret so nobody would even search for them.

Cosmic is an exciting book that will be enjoyed by both middle grade boys and girls.

Posted by Janet Ann Collins at 10:27 AM No comments: