If you're a writer you probably know writing a book is similar to birthing a baby in some ways. It can be painful, especially if you get rejections, and takes a lot of effort, but it's joyful and amazing to hold the result when the book has been published. And the work has only begun because you have to   promote the book. At least that usually doesn't take as many years as raising a child.

I've had four books for kids published, but one of them is my favorite. It's Signs of Trouble.

Anyone who knows me is probably aware that I care a lot about people, especially kids, with Special Needs. I met lots of children like that when I was a kid myself and sent to the Stanford Convalescent Home because of my severe asthma. That experience has influenced the rest of my life.

Signs of Trouble is for young children but it's loosely based on field trips I took while working as an aide in a Special Ed class for older kids. In the book the main characters get separated from their class on a field trip and use what they've learned about safety rules and recognizing signs to get back with them. Of course nobody ever got separated from the class on the field trips the real class took.

The book also contains some educational information and suggestions for activities at the end.

My tagline is "Opening Eyes, Opening Hearts" and I hope this book helps open the eyes and hearts of the kids who read it or have it read to them. It's available online and through distributors to bookstores.
Posted by Janet Ann Collins at 10:49 AM No comments:

The Puzzling World of Winston Breen

The Puzzling World of Winston Breen was written by Eric Berlin, who creates puzzles as a profession.

Kids who enjoy puzzles will love this book, which is full of them. And the plot is a puzzle itself.

Winston Breen gives his sister a box for his birthday. It has a hidden compartment containing parts of a puzzle and the rest of the book is about his struggle to solve the puzzle. He must contend with some greedy adults that have other parts of the puzzle and gets into some scary situations as a result. The stakes keep getting higher.

Since I don't especially like doing puzzles myself I skipped most of the ones in the book (the answers are in the back with footnotes showing where to find them) but had to finish reading to find out the solution to the mystery.

Besides the challenging story, this book has believable characters and a realistic setting.

It's the sort of book that will appeal to boys who are reluctant readers, but not only to them.

I enjoyed reading it a lot and hope the author writes more books in the future.
Posted by Janet Ann Collins at 10:30 AM 2 comments:

Since so many people commented (on Facebook, not here on my blog) about my last post, which mentioned something from the 1940s, I thought I'd talk about a similar topic today: plastic.

Plastic? What's historical about that?

A while after the end of World War II my daddy brought home a gift for me. It was a bright orange canoe to play with in the bathtub and was made out of a new material called plastic. Apparently the material had been developed for military use, but could now be used for other purposes.

The canoe was fun to play with, but that wasn't the most exciting thing about it for me. Every time my parents had guests the grown-ups asked me to bring out my toy to show them and they all wanted to touch and feel that new material. The grown-ups admired my toy!

Unfortunately the plastic was brittle and the canoe only lasted a few months before it shattered.

Of course it wasn't long afterwards that other things made of plastic appeared on the market and less fragile forms of the substance were developed.

Some of those things, like the baggies that replaced waxed paper for taking sandwiches to school, were considered wonderful, too.

Today plastic is everywhere, and that substance has become a major problem since it's taking over landfills and never decomposes.

What's the first plastic thing you can remember?
Posted by Janet Ann Collins at 10:30 AM No comments:

I was only a toddler during the second world war, but I do have some memories of that time. One was a substance called oleomargarine.

Since most young men had been drafted to fight in Europe and the Pacific workers were scarce and lots of supplies were sent overseas to the military. As a result, there was a shortage of many things in the United States.

One of those things was butter.

A substance called oleomargarine was created and sold in the states to be used as a substitute for butter. It was mostly salted lard and a tiny bag of dye came with it. The dye was orange, but when a housewife squished it into the white, fatty substance with a fork the stuff turned yellow and looked like butter.

I remember watching my mother do that.

Everyone called the fake butter "oleo" instead of using the longer word, oleomargarine.

How my mother hated that stuff! She said it didn't taste like butter at all.

When the war was over some varieties of oleomargarine that actually tasted like butter became available. The common name was changed from "oleo" to "margarine" and many brands of that are available today. Since most of them don't contain animal fats they may be healthier than butter.

But, as long as she lived, my mother would never buy anything but real butter.

Posted by Janet Ann Collins at 10:21 AM No comments:

Tony Abbott has written a powerful book for kids!

Firegirl is about Tom, who is shocked when a terribly scarred new girl comes into his seventh grade class. Like all his classmates, he is horrified by her appearance and doesn't want to think about how she was burned that badly. As the other kids do, he avoids her.

But gradually Tom begins to approach Jessica, at least in private. And they sort of become friends although he still finds her appearance disturbing.

While not many kids are severely burned and disfigured like Jessica, many kids with various special needs are in similar situations because "normal" kids are uncomfortable or even afraid around them.  Sometimes the same thing happens to those who are different in other ways, such as their race or the language they speak.

I hope this book helps a lot of people understand it's what's on the inside that counts the most and to accept others who are different from themselves.
Posted by Janet Ann Collins at 10:24 AM No comments:

Kids enjoy reading about detectives and mysteries and there are lots of series like that for older kids. But younger ones don't have many in that genre to choose from.  This book is for readers from four to eight years old and helps to fill in that gap. Of course most children at the beginning of that age group will have the story read to them and it will be a satisfying bedtime story. 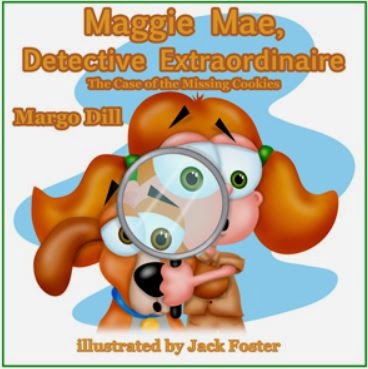 Maggie Mae, Detective Extraordinaire By Margo L. Dill is apparently going to be a series. The subtitle of this book is, The Case of the Missing Cookies.

Maggie Mae's grandmother is baking cookies, her delicious snickerdoodles, for a bake sale. But some have disappeared and Maggie Mae  needs to help her grandmother by discovering who has stolen them.

Is the thief her brother? Her grandfather? The dog?

Maggie Mae takes notes and follows the clues until she solves the mystery.

I won't give away the secret, but at the end of the book Grandma leaves everyone happy by baking lots more of her yummy cookies.

The cute illustrations by Jack Foster add to the enjoyment kids will experience when they read, or listen to, the story.

And they'll be eagerly awaiting the next book about Maggie Mae.
Posted by Janet Ann Collins at 10:30 AM 8 comments:

Many years ago the Scottish poet, Robert Burns, wrote a poem including the line, "The best laid schemes o' Mice an' Men, Gang aft agley, "

We've changed that a bit in modern English to refer to the best made plans instead of calling them schemes.

That line, which was originally about a mouse having its home and food destroyed in the middle of winter, is still referred to in our time. While it's rare for humans to have their homes destroyed by earthquakes, fires, floods, hurricanes, and other natural disasters, those terrible things do sometimes happen.

And there are lots of other ways our best made plans can fail.

I hope no one reading this post has had to deal with a major loss. But all of us have times when things get in the way of our plans.

It's September and the first day of Fall is just over two weeks away. Thinking back to our New Year Resolutions in January, I wonder how many of us have actually achieved what we had planned and hoped to accomplish by this time.

I certainly haven't, but I have accomplished quite a few other things I hadn't even thought of back then.

Sometimes when things go "agley" it can be for the best in the long run.
Posted by Janet Ann Collins at 10:27 AM No comments:

My blog posts used to show up on social networking sites like Facebook automatically through Networked Blogs. They stopped appearing on those other sites over a month ago. I'm trying Networked Blogs again to see if it works as it used to, although I never left it before.

This is a test to see if this post appears on those other sites. I'll write the next regular blog post on Saturday morning, as usual.
Posted by Janet Ann Collins at 5:46 PM No comments:

A few years ago I blogged about the difference between school calendars when I was a kid and those they have now.

But one thing I failed to mention is the advantage of the way it used to be.

Back when most public schools in the United States followed the same calendar schedule it was easier for kids who moved from one area to another. They knew school would start right after Labor Day, which national and religious holidays would give them a break, and that Summer Vacation would begin at the beginning of June. If possible, families scheduled moves so their kids would enter their new schools at the beginning of the school year.

But in the past every state had its own choice of curriculum, and even school districts within a state might be different. If a kid had to move during the school year the new school might be ahead of what they had learned in their previous school and possibly even studying different topics.

I'm no expert on the Common Core Curriculum and have heard both negative and positive things about it. However, I do think it must be easier for kids who move to have their classes in the old and new locations be similar.

If anyone can tell me more about the pros and cons of Common Core I'd love to hear what you think.
Posted by Janet Ann Collins at 10:33 AM No comments: