I have a complicated, extended family and my husband coined the term, step-neighbor-in-law, to describe some of the relationships.

But some people need different terms and I wonder what we can use. for those relationships.

Lot's of kids today have step parents, step brothers and sisters, step grandparents, etc. and those terms are generally understood and accepted.

But a lot of couples live together with no intention of getting legally married and, for people with no religious affiliation, that is becoming the norm in our society.

Kids may call their parent's partner by his or her first name, but how do they refer to each other and  tothe parent's partner's relatives? In most cases they just call them by their names, but when mentioning them to other people, such as teachers, that can be confusing.

I wouldn't be surprised if our language develops some new words to  describe those relationships.

If some of those terms are already in use, please let me know what they are.
Posted by Janet Ann Collins at 10:27 AM No comments:

I've reviewed other books in this series before. All of them are about kids in a family who have magical powers in early childhoods, but loose them as they grow older. I'm afraid Magical Max and Magical Mickey's Big Surprise will be the last one in the series.

As anyone who reads my posts regularly knows I care a lot about Special Needs and I especially like the fact that one of the characters in the series, Lily, uses a wheelchair.

In this story main characters in the earlier books, Mea and Matt, as well as their neighbor Lily, have grown up and will be graduating on the same day. Everyone is busy making and hiding secret graduation gifts for them.

Twins Max and Mickey know their magic will disappear soon, but they're trying to create the best gift of all.

It really is a wonderful gift, but I won't spoil the story by telling you what it is.

As usual, Kevin Scott Collier did a good job illustrating the book.

I'm sorry to see this series by Penelope Anne Cole come to an end, and hope to see other books by her in the future.

Posted by Janet Ann Collins at 10:23 AM No comments: 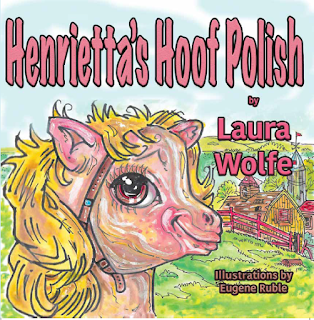 Henrietta's Hoof Polish is a book that will appeal to little girls who love horses and fancy clothes, and lots of little girls do.

Henrietta is a horse who wants to dress to impress the other horses when she competes in a show where she expects to win a prize.

Of course horses don't wear clothes, so she tries to get the fanciest shoes she can.

None of the shoes she tries seem to be quite right, so she decides to not wear any shoes and to use polish on her hooves instead. (Horses hooves are made of a substance similar to our fingernails.)

She finally chooses and uses sparkling blue hoof polish. Then she goes off to the competition, expecting to win.

But, as in real life, things don't always go as planned and instead of winning she comes in last.

But the next day she's pleased to discover that the other horses have painted their own hooves just like hers.

After reading this cute book by Laura Wolfe a lot of little girls will probably want sparkling blue polish for their own hooves . . . er, I mean fingernails.

As Earth Day approaches people are posting lots of things about recycling, and we know that topic is important all year long. But EarthDay started in 1970 and people have been recycling  - well, forever.

We've probably re-used and recycled things as long as there have been human communities on this planet.

Back in the 1950s milk was delivered to our homes in glass bottles. Empty ones were put out to be picked up, cleaned and re-used.

During WWII tin cans were collected and the metal used to help the war effort.

But way, WAY before the 20th century parents were handing down and altering outgrown clothing for younger kids, and using pieces of worn out clothes to make patches in quilts or rags for cleaning. Except for the wealthy, everyone wore clothes until they wore out instead of buying the newer styles every year.

If something made of wood  became unusable, parts of it would be used as firewood for cooking and heating, or to build something else. Pieces of metals and even ceramics were sometimes reused to make new things.

And those are just a few of the ways people used to keep from wasting things.

While milk no longer comes in bottles, there are lots of those old habits we could do today, and some people are doing them.

Can you suggest other ways to help the environment?
Posted by Janet Ann Collins at 10:25 AM No comments:

I was born on the East Coast during World War II. Back then everyone was required to cover their windows with black-out curtains at night so enemy planes wouldn't be able to see the lights and tell where cities and towns were.

When the war was over and those curtains were taken down I was amazed to see that after dark our windows reflected an apartment exactly like ours!

I made up an imaginary friend who lived there. His name was Georgie Clockie and I invented stories about him.

On the rare occasions when I rode in our car at night  Georgie Clockie even rode along in an identical car next to ours.

Then we moved to California.

At first, as we drove across the continent, Georgie Clockie did ride along beside us, but it wasn't long before I forgot about him and he disappeared.

With all the changes in my life I didn't think of him again for months, and by the time I remembered him I could no longer imagine him.

But I'll never outgrow my imagination. That's probably why I'm a writer.

Did you ever have an imaginary friend when you were a kid?
Posted by Janet Ann Collins at 10:32 AM No comments:

Is It A Mouse?

Last week I went to the store to buy a new mouse for my computer. As I approached a man who worked there to ask if they carried ones that would work for a Macintosh I stopped to think.

Should I ask if the store had "mice?" Or should the computer kind, unlike rodents, be referred to as "mouses?"

I asked the man that question.  He laughed and told me he didn't know, either. But I was happy to learn from him that they all worked on either Macs or PCs.

Way back in the 1980s I got my first computer. It, too was a Macintosh. It was a big contraption that stood over a foot high on the table and had a separate keyboard. I also had a single floppy disc to use for saving things, and thought I'd probably never fill it up as long as I lived.

It was easy to see why the contraption to move the cursor was called a mouse. It was shaped sort of like the animal kind of mouse, and the wire connecting it to the computer could have been a tail.

I used a permanent marker and drew eyes and ears on it.

But most of the modern ones don't even have wires and the shapes don't resemble rodents very much.

So, let's vote. Do you think the plural of a computer mouse should be mice or mouses?
Posted by Janet Ann Collins at 10:31 AM No comments:

Labels: Computer Vocabulary, Is It A Mouse?, Words

Han And The Mysterious Pearl

This book by Barbara Bockman is a wonderful writer! In Han And The Mysterious Pearl she has taken a traditional Chinese legend and transformed it into a story kids of all ages (and adults) will enjoy.

Han is an ordinary boy living in China long ago and, as the story becomes more and more exciting, we learn a lot about the culture and environment of that time and place.

And magic is involved, too.

Han does something wrong and the results are terrible. Can the boy possibly undo the disaster he caused?

The book is short for older readers, but the excellent writing will draw them in.

And the accurate illustrations by Carl Kocich remind us of traditional Chinese art while capturing the excitement of the story.

This book would be great for school libraries and classrooms as well as for kids (and families) who enjoy reading for fun.
Posted by Janet Ann Collins at 10:31 AM No comments:

I bought Found Things at a writers' conference because I had a little free time to read. The book was so good I couldn't put it down and was very late to my next workshop.

The book is about magic - the real kind that comes from relationships and dreams.

The main character, River Rose, was adopted and wants to know where she came from. Her older brother is missing, and a new friend, who comes to stay with her family, threatens to take over her place in the family.

The setting is beautiful, the characters are so real they could walk off the pages, and the plot is fascinating and unusual.

Marilyn Hilton, has done a wonderful job writing this book and I can't wait to read more by her.
Posted by Janet Ann Collins at 10:24 AM No comments:

Margaret Peterson Haddix is one of the most creative authors whose books I've ever read.

In Double Identity the main character, Bethany, has no idea why her family keeps moving and why they leave her to live with an aunt she had never met before. The reader doesn't know why either.

But someone has been searching for Bethany and she is in some sort of danger.

We care about what happens to her and the secret from her past is as great a surprise to the reader as it is to the girl in the story. And finding it out isn't the end of the adventure even though we now know why she's being stalked.

Double Identity was published in 2005, but the events still hold true today. I love the book, and today's kids who enjoy reading will love it, too.
Posted by Janet Ann Collins at 10:32 AM No comments: