Yesterday I participated in the local Renaissance Children’s Festival in Nevada City.
It was fun!
There was a dragon, sword fights. a parade, and LOTS of children and parents.
I helped in one of the dozens craft booths where children could make things to take home. I worked in the one where they made things out of clay, and some of the kids were very talented.
The volunteers and many of the children and families wore costumes suitable for the historical period.
Mine wasn’t very authentic, but here’s what I looked like: 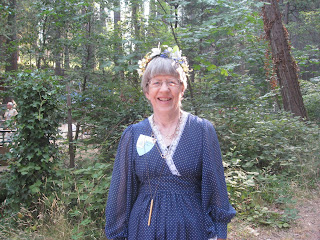 Posted by Janet Ann Collins at 10:03 AM No comments:

I usually finish a book in a few hours, but right now I’m reading Les Miserables. I’ve been reading it for several days and I’m only a little bit past halfway through.
Classic children’s books like Heidi, Little Women, and Tom Sawyer are still good. But many of the classic books for adults certainly couldn’t get published today.
But a lot of that is because our tastes have changed.
Long ago I read and enjoyed Ben Hur. But a few years ago I started reading it again and when I got to page 50 and nothing had happened except a camel walking across the desert I put it down and never read any more of it.
I guess, like everyone else in our time, I’m spoiled by the internet, TV, etc. and expect instant gratification.
But I do plan to finish Les Miserables because I’m enjoying it.
Maybe I’ll even try Ben Hur again.

Posted by Janet Ann Collins at 9:11 AM No comments:

Babies only look ahead to having their next diaper change or satisfying their hunger.
Toddlers look ahead to when their parent will get home or pick them up from childcare, or when their next meal will be served.
Young children look ahead to recess time, weekends, or special events like holidays.
As they grow older they look ahead to the next year of school and start to think about what they want to be when they grow up.
Teenagers look ahead to what will happen when they graduate. Will they go to college? Get married and have kids? What will their careers be?
Adults in their 20s may still wonder about getting married (if they haven’t done that already,) and what will happen with their careers in the future. Will they own their own homes?
As people move through adulthood they realize they’ll eventually become old and need to prepare for retirement. They look ahead at decades.
And once they do become old they wonder what it will be like to become disabled and unable to live independently. And they may look ahead to life after death.
And they (or perhaps I should say, we) spend a lot less time thinking about the future and focus on enjoying life as it is in the present.


Perhaps people should do more of that at every age.

Posted by Janet Ann Collins at 10:39 AM No comments:

Another Claim to “Fame”

On my website I list three “claims to fame,” the first being my experience with Koko, which I shared in my last blog post.
Here’s the second one: I once performed with the Joffrey Ballet, even though I don’t know how to dance.
I had a few months of ballet lessons when I was in First Grade, but after my father died we couldn’t afford those anymore. Obviously, I was hardly an expert ballerina.
One day someone at the church I attended in San Francisco mentioned that the ballet company was looking for supernumeraries. That’s what would be called extras in theatre terminology.
I tried out and was accepted.
They were performing Petrushka, which takes place in Russia in the winter.
Before each performance I’d go down to the basement in the old San Francisco Opera House and  have a wig and long beard  put on by the makeup people.
Then I’d wander through the maze of rooms trough the room where the orchestra was rehearsing and they’d all laugh at me.
In the room where I changed into my costume I put on layers of padding and heavy winter clothes. I could hardly move!
During the performance all I had to do as part of the crowd was sway with the music and turn around once.


It was hardly what you would call dancing, but I can say I performed with the Joffrey Ballet.

Posted by Janet Ann Collins at 6:32 PM No comments:

Yesterday the weather here in the Sierra foothills of northern CA was overcast and muggy. That’s very unusual in this area.
When I was a kid my grandfather lived with us, and I grew up hearing stories about the 1906 earthquake in San Francisco.
Because the quake and resulting fires destroyed homes, people camped outside for days, and the weather was overcast and muggy then. People who had experienced that event called it earthquake weather for he rest of their lives. Of course it didn't cause the quakes.
When the Loma Prieta earthquake happened in 1989 I lived in a victorian house that swayed from side to side during the quake. Fortunately very little damage was done to our home, but a lot was done to other structures in the area.
Earthquakes are rare, but very dangerous. Just think about what has happened more recently in Haiti.
It’s the movement of the tectonic plates below the surface of the earth that causes them, and I’m afraid all the lava pouring out from the volcanic eruptions in Hawaii may cause the Pacific tectonic plate to move.
I wouldn’t be surprised if there’s a major earthquake in the next few months. I hope I’m wrong.

Posted by Janet Ann Collins at 9:00 AM No comments:

I’ll make this post short and simple.
I’m sure you’ve heard of the Golden Rule. I’ve seen paraphrases of it from most of the major religions on Earth.
If only everyone would follow it, most of our political problems, both in the USA and around the world would be solved.
So lets all try to do unto others as we would like others to do unto us. In other words, let’s all treat everybody else the way we would like to be treated.
Even though we may not be famous and powerful, we help make the world a better place a little bit at a time.
Posted by Janet Ann Collins at 8:23 AM No comments:

When I Met Koko

I mention on my website that I once met Koko the gorilla and, since her death has been in the news lately, I was asked to share more about that experience. So here it is...

Back in the 1970s when I lived in San Francisco I worked at California School for the Deaf in Berkeley,  my husband was a Sign Language interpreter, we had a Deaf foster son, and we both interpreted services at our church in Sign Language.

We also had a deaf dalmatian who had learned to understand about 300 signs.

Someone at our church told me he knew a woman who was teaching Sign Language to a baby gorilla called Koko, and arranged for me to contact her.

I wanted our dog to meet the gorilla, but Penny Paterson said that wouldn’t work since gorillas are terrified of dogs. In Africa all wild dogs are predators.

But she did arrange for me to meet her at the zoo where she explained to me what she was doing, then took me out to Koko’s cage and went back to work.

A young man who was also working with Koko entered her cage and she slammed the door shut so he couldn’t leave.

Then the baby gorilla quickly clambered up on top of his head so he couldn’t scold her.

I asked if he wanted me to get help and he replied that wasn’t necessary because someone with a key would be coming soon. But he told me having Koko on his head was really hurting his neck.

Koko turned her head away, then peeked back at me.

I told her, “Give him a hug,” and she climbed down into his arms and hugged him.

He thanked me, and I watched Koko for a while longer, but that was the end of my conversation with her.

For the Fourth of July

Not like the brazen giant of Greek fame,
With conquering limbs astride from land to land;
Here at our sea-washed, sunset gates shall stand
A mighty woman with a torch, whose flame
Is the imprisoned lightning, and her name
Mother of Exiles. From her beacon-hand
Glows world-wide welcome; her mild eyes command
The air-bridged harbor that twin cities frame.
“Keep, ancient lands, your storied pomp!” cries she
With silent lips. “Give me your tired, your poor,
Your huddled masses yearning to breathe free,
The wretched refuse of your teeming shore.
Send these, the homeless, tempest-tossed to me,
I lift my lamp beside the golden door!”
Posted by Janet Ann Collins at 8:44 AM No comments: