I've been reviewing a lot of books here lately because I think books make wonderful gifts for kids. Here are reviews of two more by author Janet Halfmann.
Fur and Feathers is about a little girl who imagines creative ways to replace the coats normally worn by animals after their usual fur, feathers, scales, etc. are blown away by wind in her dream. Besides being a cute story, the book helps young kids understand the purpose of the real coverings animals have. The book contains an educational section of scientific information, which would be of interest to older kids at the end. The illustrations by Laurie Allen Klein are cute and well suited to the child's fantasy.
Little Skink's Tale also presents information about the natural world in creative ways. In this book a skink who looses his tail imagines what it would be like to have the tails of various other creatures until his own grows back. And this book, too, contains educational material at the end that could be used by teachers or parents to help kids learn more about nature. It has the same illustrator, but the style is quite different and shows the beauty of nature.
In my opinion both books would be great gifts for young children because kids would enjoy the stories while learning about nature.
Posted by Janet Ann Collins at 10:26 AM 5 comments:

My Sister is My Best Friend 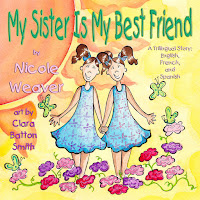 Because this blog is about words, books, and kids there couldn't be a better book for me to review here than My Sister is My Best Friend by Nicole Weaver.
There are lots of books about sibling rivalry but this one, by contrast, is about two sisters who get along well together and enjoy sharing experiences. Since the girls in the book are twins, it would be an especially appropriate gift for real-life twins.
The words aspect of the book is that it is written in three languages, English, French and Spanish. I enjoyed trying to figure out the meaning of the individual words and phrases in the languages I don't know and some kids will probably like doing that, too. Although I took French in school decades ago and never studied Spanish I found that I could understand more of the Spanish words than the French ones.
My Sister is My Best Friend would be a great help to kids who know one of the three languages and are trying to learn another and already bi- or multi-lingual kids will like it.
Of course children who can only read or hear the story read in one language will enjoy it for the cheerful experiences the sisters share. The cute illustrations by Clara Batton Smith add to the pleasure of the book.
Posted by Janet Ann Collins at 10:27 AM 6 comments: 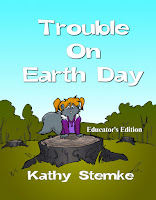 Why, you may ask, am I reviewing a book about Earth Day the day before Thanksgiving?
Trouble on Earth Day by Kathy Stemke is a cute picture book about a little squirrel who learns to appreciate and use what she has and to help someone else. What better time of year could there be to remind us all to do that?
Besides the appealing story and charming illustrations by Kurt Wilcken, the book includes many pages of activities to help kids appreciate the natural world and reuse things instead of discarding them. Some of those activities are projects kids could make that would be great Christmas presents.
So this is a perfect time of the year to get that book for kids.
Posted by Janet Ann Collins at 10:00 AM 6 comments:

After my last three posts you're probably tired of hearing about bullies, but I have one more important thing to share.
A while back I discovered this website, http://www.bullies2buddies.com and realized the principles suggested there are the things I had experienced. The idea is that bullying is like a game and if the bully gets someone upset he or she wins. There had been many times in my life, especially when I was a kid, when bullies got me upset and won the game, but the few times I'd reacted as this website suggests, the bullies left me alone. I guess those times I'd won.
I strongly suggest anyone dealing with bullies, and that includes verbal ones, check out the information at www.bullies2buddies.com.
Posted by Janet Ann Collins at 10:05 AM No comments:

My husband used to work at a retirement and nursing home in the inner city where they had constant problems with graffiti. The maintenance people had to spend huge amounts of time painting over it, but the graffiti would always be back in a day or two.
One day my husband was walking down the street on his lunch break when he saw a some members of a street gang standing on a corner. He walked over to the gangstas, introduced himself, and said, "You know, we try to help the community as much as possible." He mentioned several ways their families might have benefited from what the people where he worked did and continued, "You're making our job a lot harder by painting graffiti on the walls. Would you please stop?"
For the rest of the years he worked at that facility there was never any more graffiti from that gang - or any other.
Posted by Janet Ann Collins at 10:18 AM No comments:

In the 1960s I lived in a rough inner city neighborhood. I worked the swing shift so I usually didn't get home until nearly 11:00 p.m. and often had to park a block from my apartment.
One night as I was crossing the street a gang approached.
"Hey, lady, " one of them called out. "Ya wanna f*#* with me?"
I calmly replied, "No thank you," and kept walking.
They seemed stunned and not to know how to react, so they let me alone and I got home safely.
If I had acted scared, angry or upset things probably would have gotten a lot worse. Yes, I could have been in serious trouble anyway, but by not reacting as they expected I didn't encourage their bullying.
Bullying is like a game, and if bullies get someone to react with fear or anger, they've won. That night the bullies lost.
Posted by Janet Ann Collins at 10:41 PM No comments:

As a kid I was bullied a lot and the bullies usually succeeded in getting me scared and upset. But here's one incident when I handled the situation well.
One summer day a girl pushed me down on the sidewalk and sat on my chest. Nobody else was around so I had no help.
She raised her fist to punch me in the face, which scared me, but for some reason I reacted differently than usual. Even while terrified, I felt sorry for her. Instead of crying or begging her not to hit me I calmly explained that nobody in school liked her because she was a bully and suggested if she treated people nicely she would have some friends.
"I don't care if they like me as long as I can beat them up," she replied. But she stood up, walked away, and never bothered me again.
Sometimes turning the other cheek really does work.
That girl moved away soon afterwards so I don't know if she ever took my advice or not, but I hope she did.
Posted by Janet Ann Collins at 8:55 AM No comments:

Earthquakes. Floods. Droughts. Storms. Hurricanes. It seems like every week or so there's another natural disaster somewhere in the world. I don't know if more are actually happening or we're just more aware of them because of quick information through technology, but a lot of people have certainly been affected.
Many years ago I was involved in a Yahoo group that got into a discussion about disasters. We wanted to know which kind was worst.
Strangely, everyone who participated was sure the kind that happened where they lived was preferable to others.
People who lived where hurricanes happen said those were better because the weather service always gave advance warning so they could prepare.
People who lived where tornadoes happen said those were preferable because they only damaged a thin strip of the area.
People who lived in earthquake areas said they'd rather deal with those because serious ones were decades apart.
Personally, I think forest fires are the most dangerous because they happen often, cover huge areas, and can't be predicted.
What kind of natural disaster do you think is worst? Which kind would you rather deal with?
Posted by Janet Ann Collins at 10:21 AM No comments: