I was always a good kid, but in the summers when I performed with Marin Junior Theater I usually played the part of a villain, and loved doing that.

The first year I played the part of Lady Precious Harp from a play called The Land of the Dragon. The play took place in China. I forget the plot and wish I could read the script again but I've searched unsuccessfully for the title online.  The play would probably be considered racist now.

The next year I was the Wicked Witch of the West in The Wizard of Oz. All summer when I saw kids from the theater group downtown they'd call to me, "Hi, Witch!" That always made me feel proud.

The third year I decided to be a good character and became Cinderella's fairy godmother, but that wasn't nearly as much fun as pretending to be bad.

Besides performing in the plays, two of those summers I got to go to San Francisco with the other main characters and appear on the local TV Channel 5 to publicize the plays. I was famous! Well, sort of.

A few years ago I realized nearly all the other kids who got important roles in the plays had mothers who were active as volunteers for Marin Junior Theater. Maybe I was a good actress to always get big parts even though my mother wasn't involved. She had a day job because she was widowed, so maybe the other women who ran the group just felt sorry for me.
Posted by Janet Ann Collins at 10:28 AM No comments:

I was in the second grade when my best friend's family got the first television in her neighborhood. Every weekday evening I was allowed to go across the road to her house and watch The Howdy Doody show.

Since the other kids in the neighborhood weren't invited to join us, they'd line up outside and watch through her living room window. They trampled the flower beds so her mom rearranged the living room furniture so the TV couldn't be seen from the window.

Before long most of the neighbors had purchased TVs - except us. My widowed mother couldn't afford that luxury.

But when I had to go to a classmate's house to watch the inauguration of President Eisenhower (all kids were supposed to watch it before coming to school later that morning) she decided it was worth the investment to get a TV.

There were three television channels, Four, Five and Seven. But when Channel Four upgraded to "super power" a wide, black stripe appeared down the middle of the screen so we couldn't watch that channel at our house. But it wasn't long before Channel 13 began so we could choose between three of them again.

A few years later I actually got to appear on Channel Five but I'll blog about that next time.

What TV shows did you watch when you were a kid?
Posted by Janet Ann Collins at 10:27 AM No comments:

Back in ancient history I was born on the East Coast and my mother, who was from California, missed her former home. So every Saturday morning we listened to the radio program, San Francisco is Your Home.  Even after moving to California we always listened to that program. On the west Coast it was simply called, This is Your Home.

On Saturday evenings we were allowed to stay up an hour later than usual and listen to The Lone Ranger. Even though it wasn't about California, it was about The West.

When I was in elementary school and lived in California all the kids in our neighborhood would listen to Big John and Sparky, Space Patrol, and The Lone Ranger on the radio.

We'd go outside and pretend to be cowboys and Indians (or horses - my best friend was ALWAYS a golden palomino) or that we were flying to outer space and encountering aliens from other planets.

Sometimes, when we hadn't just listened to one of those programs, the girls would pretend to be princesses or magical fairies and dress up in old Halloween costumes or our mothers' cast off clothes. But the boys were not interested in pretending to be princes or anything like that.

Sadly, today's kids don't get to use their imaginations as much as we did. They always have adults hovering over them, or are busy with electronic games and devices.

When you were a kid did you play pretending games?
Posted by Janet Ann Collins at 10:30 AM No comments:

I've reviewed several books in Penelope Anne Cole's series about kids in a family who have magical abilities when they're little, but lose them when they get older.

In this book, twins Max and Mickey plan to use their magic to create a surprise.

Their older brother and sister, Matt and Mea, and Lily, their friend who uses a wheelchair, will all be graduating on the same day.  (Those characters were featured in Cole's earlier books.)

Everyone in the family is preparing graduation gifts and trying to keep their gifts secret.

On graduation day all the gifts are revealed, but none are as amazing as the one Max and Mickey have created.

I won't reveal any of the secrets here, because I don't want to spoil the reading experience, but I will say I loved the climax.

But Max and Mickey are about to loose their magic, so this book is probably the last one in the series and I'm sorry to see it end.

I'll miss the colorful illustrations by Kevin Scott Collier, too.
Posted by Janet Ann Collins at 10:15 AM 2 comments:

Why Are the Pigs Purple?

This picture book by Sharon P. Stanley is very silly. Since young kids love silliness, they are likely to enjoy it.

The story is told in long sentences, sometimes continuing from one page to another. But it isn't meant for beginning readers and children will enjoy hearing their parents read it out loud.

It begins with two pigs who go to a spa to have their tails curled, and follows them from one activity to another.

I won't spoil the story by revealing what the pigs do, but the events lead to the ending when the pigs actually are purple, and we know why.

Eugene Ruble did the illustrations and they go well with the amusing feeling of the book.
Posted by Janet Ann Collins at 10:28 AM No comments: 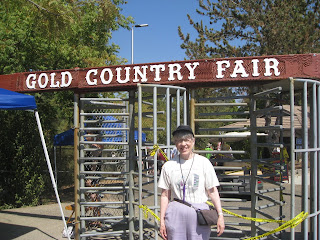 I'm sharing a booth with other members. We'll be selling our own books and those of other members who aren't there at the same time.

Of course I hope to sell lots of my own books, but even if I don't it's always fun to be with other writers, and to meet people who appreciate books and like to read.

At the beginning of Summer I wrote a blog post about making seasonal resolutions instead of annual ones. Lots of people fail to keep New Years Resolutions, including me.

Well, I kept part of my seasonal resolution and I'm almost done with the other part. I hope to have it completed by September 22 when the season actually changes.

How about you? Did you make a resolution at the beginning of Summer? If you did, have you kept it?

Now it's time for an Autumn resolution. Mine is to find ways to do more public speaking, which I enjoy.

How about you? Would you like to make an Autumn resolution and plan to complete it by the beginning of Winter?

If you do, feel free to share it here so we can hold each other accountable.
Posted by Janet Ann Collins at 10:31 AM No comments:

Now that school has started again I thought people might be interested in my book, Signs of Trouble.

It's about kids with learning disabilities who get separated from their class on a field trip and use what they've learned about safety rules and signs to get reunited with them.

Educational material at the back of the book can be used by teachers or homeschooling parents to teach children about safety, help them recognize signs, and to understand and accept others who have special needs.

Children usually enjoy the story and find the ending amusing.

The book is for kids from three to eight years old. It can be read to the young kids and the older ones can read it themselves. 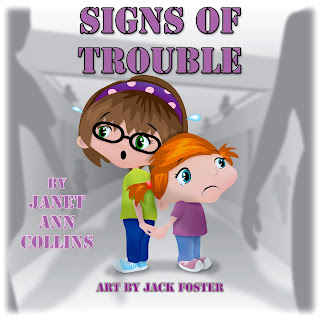 The book is available online or through local bookstores.

Posted by Janet Ann Collins at 10:24 AM No comments: