Someone in my family was born on February 28th. Now that was a near miss!
People born on February 29th only have one real birthday once in every four years. I feel sorry for kids born on leap day.
Of course they can still celebrate their birthdays every year even if not on their true birthdays. Lots of kids have parties on the weekends nearest their birthdays instead of on the exact days, but it must still be hard for children not to have their parents and grandparents treat them specially on the anniversaries of the day they were born.
Leap year and leap day only show on calendars every four years and are not natural events like years, seasons, and days. Like weeks and hours, they only exist because people agree that they do. Months and years are based on the seasons and lunar cycles, but humans have agreed on modifications over the years because the actual ones don't coincide exactly with our concepts.
So let's agree that anyone we know who was born on leap day deserves extra special treatment this year.
Posted by Janet Ann Collins at 10:43 AM No comments:

Was the world really a safer place for children in past generations? Maybe and maybe not.
In the 1940s and 50s when I was a kid everyone went out and played without adult supervision and it was considered normal to get skinned knees and even broken arms. That was just an ordinary part of childhood. Once I got knocked out for a few minutes playing Red Rover at recess and went back to class when the bell rang. That game was forbidden from then on but nobody called my mother or suggested I get medical attention.
Back then we heard about people using illegal drugs in New York City, but nothing like that happened in most of our country. And street gangs were only in the big cities and usually confined to the slums.
Once in a while a child of someone rich and famous might get kidnapped and held for ransom, but ordinary kids didn't need to fear being kidnapped.
And, while driving, most people obeyed the speed limits and stopped for pedestrians, although there were some reckless drivers.
But some things simply weren't talked about.
We had a neighbor who was arrested. The story of his arrest was in the newspaper, but nobody mentioned to us kids what he had done and when he was due to be released from prison his wife and children left the area and changed their name.
There were probably a lot of incidents like that. Abuse in families was simply not discussed in public.
Yes, I guess things were probably safer for kids in those days, but it's a shame today's kids don't have the freedom we had.
Posted by Janet Ann Collins at 9:31 AM No comments: 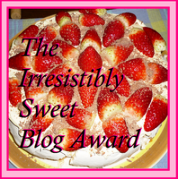 Carol Peterson recently gave me the Irresistibly Sweet Blog Award.
What? Sweet? Me?
While I think neither I nor my blog deserve it, I'm honored that she gave it to me.
Now I need to find others to give the award to and that won't be easy. While most of my friends are wonderful people with many talents and multiple positive traits, I'm not sure "irresistibly sweet" applies to any of them. Spicy would be a better term for most of them. ;-)
I'll have to think about this for a while.
Posted by Janet Ann Collins at 12:22 PM 2 comments: 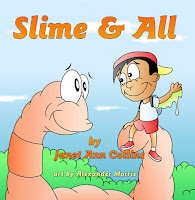 My newest book is being published right now. It should be up on Amazon and other online sites soon and bookstores can order it.
Slime and All is an early chapter book about a giant worm who wants a friend. I hope it will encourage kids to accept others who are different from themselves.
Posted by Janet Ann Collins at 10:31 AM No comments:

Labels: books for children, Slime and All

Since this is Black History Month it seems like a good time to talk about prejudice even though I've blogged about that topic before. Prejudice is assuming all members of a group are alike and bigotry is a negative prejudice against a group of humans.
While there are still some people who hold the prejudices against minorities common fifty years ago, there are also members of those minorities who are prejudiced against the majority. I've seen situations where black people showed prejudice against whites and Jewish people showed prejudice against Christians, assuming all members of those groups are bigots. Two wrongs don't make a right.
Some people with special needs are also victims of bigotry.
I've known wealthy people who said anyone with financial problems must be stupid and lazy and other people who believed anyone with plenty of money must be a selfish snob.
This is the twenty-first century. Isn't it time we realized that human beings are individuals? Let's stop labeling each other. Please.
Posted by Janet Ann Collins at 10:33 AM 2 comments:

People without spouses or sweethearts tend to feel left out on Valentine's Day, but they don't need to. Saint Valentine's Day, as it was originally called, wasn't intended as a celebration of romance.
One of my college professors told us a definition of love that I've never forgotten. "When the happiness and well-being of another is essential to one's own happiness and well-being, a state of love exists."
Of course romantic feelings and physical attraction are important because the human race would have vanished long ago if people didn't reproduce.
And sometimes people must do things that make someone they love unhappy, such as parents refusing to give children things they want, or even punishing them. But if those acts are done for the long-term happiness and well-being of the children they are expressions of love.
But on Valentine's Day it's fun to show love by making people we care about happy right now. How will you show your love to others?
Posted by Janet Ann Collins at 10:05 AM No comments:

I've heard people make positive comments about the Superbowl Commercials, but ads are still ads. Back in the 1950s TV shows might have five minutes of commercials every hour. Now it seems like there are at least 15 minutes of ads during of every half hour. Well, almost.
Are you old enough to remember subliminal advertising? I think that was during the 1970s when ads were shown to have subtle messages meant to infiltrate people's brains.
In a way, all ads are almost a form of hypnosis, intended to sink into our subconscious minds. Even (or maybe especially) the irritating ones keep the brand names in our memories, making it more likely that we'll buy the products.
I've read that young children usually believe everything they see in commercials. Even some adults are naive enough to believe them.
And I hate the way ads for prescription meds (which I don't think should be advertised anyway) play soothing music while listing horrible possible side effects quickly and more quietly than the rest of the commercial.
Long ago people predicted that someday we'd pay for TV service so there wouldn't need to be anymore commercials but now we must pay for the privilege of watching the ads.
In the Sci-Fi novel 1984 by George Orwell governments beamed propaganda into people's homes. That sounds a lot like todays political commercials to me. Ads are probably the main factor determining who wins elections now.
At least I understand it's becoming illegal for the ads to be louder than the programs, so it will be possible to leave the room during commercials without hearing them. That should help a little bit.
Posted by Janet Ann Collins at 9:42 AM No comments:

Recently someone asked me to explain how I became a writer, so here’s the story.

From early childhood I wanted to be an author and majored in English in college. I carefully wrote every assignment in my first English class according to the Thesis Sentence Outline that had been drilled into us in high school.

One day the professor asked what I wanted to do after graduation. When I told him my goal to be a writer he replied, “You’ll never make it. You have no creativity.”

Foolishly I believed him and gave up the dream of getting published, although I never stopped writing. But no other career seemed right so I still told people I wanted to be a writer.

My roommate said, “Show me your rejection slips. You’re not a writer unless you have rejection slips.” To stop her nagging, I sent something to a publication where I knew it couldn’t possibly be accepted, showed her the rejection slip, and she left me alone.

One day about 25 years later I remembered the professor’s words and realized following that outline had made my writing uncreative. I wrote a children’s story I had often told my kids, submitted it to two possible publishers, and it was accepted by one of them.

“That was easy,” I thought.

I typed out something else, sent it off, and got the first of many rejections. That showed I was really a writer!

Realizing I needed to learn the craft, I read books, subscribed to magazines, attended conferences and joined a critique group. As with any other profession, there was a lot to learn.

Since then I’ve lost count of how many things I’ve had published in periodicals, and I’m now the author of three books for kids. A fourth one, Slime and All, will be published this month.

Labels: Becoming a Writer, Profession of Writing, Publication, Slime and All, writing

Since I used to be a foster parent (the kids are all grown now) I wanted to read One Nutty Family by James Byers. It's a cute picture book with charming illustrations by Kevin Collier.
I'm a bit confused by the use of acorns to represent the foster children, and would have preferred that he use an animal or bird. Otherwise I think the book does a great job of portraying the relationships in a good foster family. Unfortunately, not all of them are good and many foster kids don't get to stay in the same home permanently as a forever family. I hope families who share this book will be inspired to become like the one portrayed in it.
The questions for discussion at the end would be great to share in families or classrooms, and some of them apply to traditional or step families as well as to foster ones.
There aren't enough books for kids about foster families and I'm delighted that James Byers has written this one.
Posted by Janet Ann Collins at 11:40 AM 3 comments: