What do you do with bread crusts?
Sometimes I use them instead of pasta in casseroles

Other times I use them to make bread pudding.

I don’t like to eat them as I do other bread slices, for toast or sandwiches.

I’d love to hear your suggestions.
Posted by Janet Ann Collins at 1:04 PM No comments:

A Stitch in Time

At first I found the title of this book confusing because it didn’t seem to be about sewing. But it actually is. Taxidermy involves sewing animal skins together after the insides have been removed and the skins are stuffed.
Donut is only eleven years old, but she has already learned to stuff small, dead animals and add glass eyes to make them look alive.
Her godfather, Uncle Sam, has taught her how to do that.
But Donut has become an orphan and her irritating aunt has come from Boston and intends to take the girl back there and put her in a school.
No! Donut is determined not to go and is willing to take any risk to stay where she has always lived. As the story unfolds she gets into all sorts of trouble.
A Stitch in Time is historical fiction and takes place in the early 20th century. It’s well written, the characters are believable, and the conflict is real.


I look forward to reading more books by Daphne Kilmar in the future.
Posted by Janet Ann Collins at 9:24 AM No comments:

Labels: A Stitch in Time

When I was a kid if a woman wanted to be fragrant she’d wear perfume, cologne, or “toilet water” (That was a translation of the French term, eau de toilette) and men might use aftershave. If there was a bad odor in a house people would use Air Wick to overpower it.
But now fragrances are everywhere.
Lots of public buildings are loaded with fragrances, supposedly to make them attractive to customers, but they have the opposite effect on people with allergies and sensitivities.
Most cleaning products, laundry detergents, cosmetics, personal care items, and many other things now contain fragrances. Odor eliminators simply make people unable to smell them, but the actual odors are still in the air.
Years ago I read about a study that said about 18% of people have some sensitivity to fragrances. More recently I read one saying more than 30% of the population have adverse effects from fragrances.
I’m certainly one of those.

I don’t often mention my own books here, but since it’s the beginning of the school year I think it’s a good time to mention this one.

The kids in Signs of Trouble use what they’ve learned about safety rules and recognizing signs to get reunited with their class.

There are educational materials at the end of the book that will be helpful to all young children as well as those with special needs. I used similar activities as a preschool teacher.

The book can be ordered through local bookstores or the usual internet venues.
Posted by Janet Ann Collins at 10:06 AM No comments:

Two weeks ago I got a new dog. She had been rescued by a shelter and kept for 30 days, but nobody claimed her. She was spayed a few hours before I got her.
I named her Bushy. 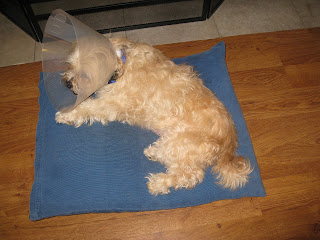 Yesterday she had the stitches taken out and the cone/torture collar removed and this morning I took her to the groomer.
This is what she looks like now: 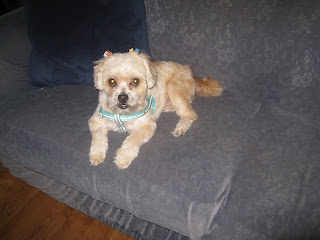 What a difference!
Posted by Janet Ann Collins at 3:47 PM No comments:

I read middle grade fiction a lot, and The Trojan Horse Traitor is one of the best books in that genre that I’ve ever read.

It starts out like an ordinary story about kids at summer camp, but develops into a thrilling fantasy. The plot is so exciting I had to keep reading until I finished the entire book.

I don’t want to give away the plot, but the characters are believable and the story is amazing and exciting.

Amy C. Blake has done a wonderful job writing this book and I hope to read more of her work in the future.
Posted by Janet Ann Collins at 10:42 AM No comments:

The first thing I noticed about Mixter Twizzles Breakfast was the bright and amusing illustrations by Wei Lu.
But the story immediately pulled me in because of the amusing language.
The book by Regan W. H. Macaulay is about a little monster that lives under a chicken coop and steals eggs from the hens.  The illustrations show him as a demon.


I don’t want to give away the ending, but it is amusing and very positive after Mixter Twizzle hatches an egg himself.
Posted by Janet Ann Collins at 9:39 AM No comments:

It has been a while since I’ve blogged about books for kids, so I want to get back to doing that.

Ulysses the Befuddled Basset by Emma M. Glover is a good one to start with.

It’s about a dog  - obviously a basset hound -  who tries to sound like other animals. He finally uses his real voice and saves a child’s life as a result.

This is an important moral for kids to learn. Be who you are and don’t try to copy other people.

But the book isn’t at all preachy-teachy. It’s a fun read and the colorful illustrations by K. C. Snider capture the story perfectly.
Posted by Janet Ann Collins at 10:32 AM No comments:

My last dog had to be put to sleep in April and it has taken quite a while to find a new one.
Because of my allergies I can only have one that doesn’t shed and big ones are expensive. I had checked out several dogs that met the requirements, but none of them were right.
Finally I found just the right dog!
She’s a Lhasa Apso/mutt and I named her Bushy.
My last dog was white and her fur picked up the dirt so quickly she’d be tan the day after she’d been bathed. Bushy is naturally tan, so that won’t be a problem with her.
She was spayed the same day I got her and must wear one of those horrible cone collars for two weeks, but she’s tolerating it.
Bushy is sweet, affectionate, and eager to please me. I’m delighted to have her.

Posted by Janet Ann Collins at 10:08 AM No comments: