In this book by Emma M. Glover, Katie, the Heavenly Hound doesn’t start out being heavenly. Instead, she causes so much trouble her human tosses her out on the street and she becomes homeless.

Then her guardian angel teaches her how to help people. And the people she cheers up and helps go on to do the same for others, as a result.

Katie becomes a therapy dog, and eventually helps the same human who kicked her out in the beginning of the story.

Since this book is for young kids it doesn’t mention the time it takes to train a therapy dog or the shelters available for unwanted pets.

But I like the theme of love and good deeds spreading to help others.

Have you ever wondered why February is shorter than other months?

Back in the early days of the Roman Empire their calendar year started with the first month of Spring. That's March, which was named after Mars, their god of war. That month had 31 days and the rest of them alternated between 30 and 31 days until the end of the year. The last month, February, only had 29 days.

The Romans realized the year is slightly longer than 365 days, so an additional day was added to February every fourth year.

And, eventually, they changed the first month to January.

When Augustus became the Caesar, or emporer he wanted his month, August, to be as long as the month named after his predecessor, Julius Caesar. (Julius Caesar's month was July.) It was supposed to be lucky for a month to have an odd number of days.  So Augustus had one day taken from the last month of the year and added to August. 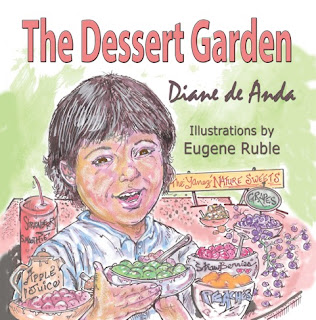 This book by Diane de Anda starts out with kids wishing that the family's visit to a dessert garden will find doughnuts and cupcakes growing on trees.

But, instead, its a farm where lots of fruit is grown, and the family learns how to make some delicious desserts from the fruit.

They happily go home with lots of fresh fruit to enjoy.

The book includes some Spanish language with translations as well as educating young readers about how healthy foods can be sweet and delicious.

Anyone who reads this book will finish it with a hunger for fresh fruits and the yummy treats that can be made from them.

Eugen Ruble's illustrations will encourage that hunger even more.
Posted by Janet Ann Collins at 10:24 AM No comments:

Writing is a solitary business, but writers are communicators.

Locally I'm in three critique groups and two writers' groups that have speakers and business meetings. I belong to some online groups and follow posts and conversations from agents and lots of other writers.

I've spoken at some writers' conferences and attended others. Some of my closest friends are people I've met at events like that.

When writers get together we connect in a way that's different from other friendships because we understand each other at a level "normal" people wouldn't understand.

There have been times when I got discouraged and wondered if I should give up writing, but then I realized I'd have to leave all those groups. Every time, that was enough to keep me motivated.

I'll probably never become a best-selling author, but I've found out about times my writing has helped other people, and that's a strong motivator.

And I enjoy writing and communicating with other writers a lot.

Okay, I'd better stop blogging and get back to work.
Posted by Janet Ann Collins at 10:31 AM No comments:

The Trojan Horse Traitor is about Levi, a boy who gets sent to a camp on an isolated island for the entire Summer, and must deal with bullies.

But if you were to move J.R.R. Tolkien and C.S. Lewis to twenty-first century America and put them in that camp they might have been able to write something like this book.

Levi and his new friends must deal with hard work, strict staff, and nasty kids, but also magic and demons.

The plot is full of surprises and Levi learns things he never knew about himself.

While the book is listed for New Adults, it doesn't involve much romance, so younger kids would enjoy it if they can cope with the scary stuff. And, hey, that's what makes fiction appealing, isn't it?

When I first opened the book I intended only to read a few pages at that time, but it was so exciting I had to finish the whole thing.

Amy C. Blake is a wonderful writer and I hope to see more books by her in the future.

Posted by Janet Ann Collins at 10:30 AM No comments:

Since I've always been interested in Historical Linguistics for this year I got Jeff Kacirk's Forgotten English as a daily calendar. There are six pages every week and each one lists an antique word that is no longer used. Last week one of the words was chirology. It means "The art of conversing with the hands and fingers."

My husband used to be a Sign Language interpreter, I worked at California School for the Deaf for many years, and we raised three Deaf foster children, so I'm obviously interested in conversing with the hands and fingers.

The quotation describing that word is from the late 1800s. At that time, deaf children were forbidden to use Sign Language to communicate in the schools. People believed that would encourage them to speak and read lips. Since most deaf children had lost their hearing due to high fevers and had already been exposed to spoken language, the "Oral Method" might have worked with some of them. Today most of those illnesses are prevented by inoculations or treated with antibiotics. Most childhood deafness is either hereditary, or caused by prenatal damage, sometimes from drug use.

And all culturally Deaf people resent the oral method, which is not used anymore.

And, in the past, the science of Linguistics defined language as written or spoken communication, so Sign Language wasn't considered a language. But that has changed, and today lots of schools and colleges teach it.  Lots of people who aren't from Deaf families know at least some Sign Language.

Even though almost nobody would use that antique word to describe it, chirology is accepted and available.
Posted by Janet Ann Collins at 12:48 PM No comments:

While preparing for his part in a class play and dealing with an irritating girl, Jeremiah learns his best friend and neighbor will be going away to camp.

Summer vacation will be lonely and boring.

Just before school is out some puppies are brought to an assembly to encourage kids to adopt animals  from the shelter. Jeremiah falls in love with one of them.

He finally convinces his mother to let him adopt that dog.

But when they go to the shelter they find out the puppy has already been adopted by someone else. The boy doesn't want any other dog.

And letters from his friend at camp only serve to remind him how lonely his own life is.

But the interesting plot leads to things Jeremiah wouldn't have guessed and, while the book has a satisfying ending, it gives hints about a future book.

This book will be welcomed by young readers who have met Jeremiah Lucky in an earlier chapter book where the boy encountered his guardian angel. And Angus, that unusual angel, does make some brief appearances in this book.

But Jeremiah Lucky Finds Puppy Love can stand alone and will be enjoyed by kids who haven't read the first book in the series. And they'll probably be eagerly awaiting the next book about Jeremiah Lucky.

Eric Hammond has provided a black and white illustration for each chapter that will tempt kids to use their crayons and color it in.
Posted by Janet Ann Collins at 10:28 AM No comments:

As Valentine's Day approaches lots of people are talking about love.

In some respects that is correct. Physical attraction or social status are often mistaken for love in our culture and there's a lot more to it than that.

But the more I think about the professor's definition the more I notice the big flaw in it.

If a certain boss is unhappy or unwell he might be unpleasant to the employees or even fire them, so his happiness and well-being is essential to theirs, but they probably don't love him.

And just think of all the kids who kiss in with bullies and act like their friends just for self protection.

Or abusive spouses and parents who hurt others deliberately if they aren't given what makes them happy. Do their victims really love them?

Obviously real love involves caring about the person's welfare, but it also includes some sort of pleasure in the company and/or communication with the other person.

It means wanting their happiness and well-being for their benefit, not just for our own.

How would you define love?
Posted by Janet Ann Collins at 10:28 AM No comments:

Labels: Definition of Love, Valentine's Day, What Is Love?

Echo, A Novel by Pam Munoz Ryan (sorry I don't know how to add a tilde to her middle name,) is one of the best books I've ever read, and I've read thousands.

It's a long book - nearly 600 pages - but I finished it in one day because it was too good to put down.

It's actually four books that are all part of one story.

Starting in the 1800s a boy named Otto encounters three strange women in the woods and gets a magical harmonica. That instrument is an important factor in the lives of other kids: Mike in 1935, Ivy in 1942, and Friedrich in 1951. The story and harmonica begin in Germany, then move to Pennsylvania, California, and New York.

Each story has it's own plot, is well written, and they all tie together satisfactorily at the end. The book is part fairy tale, part historical fiction, and all exciting stories with characters we care about.

Pam Ryan has got to be one of the best writers on this planet and I can't wait to read other books she's written.

Posted by Janet Ann Collins at 10:26 AM No comments: