In Wish Stealers Tracy Trivas has written an original fantasy about Griffin, a girl given a box of magic pennies by a sinister old crone.

Unlike most fantasies, this one takes place in the ordinary world of a middle school student who must deal with nasty, popular classmates, difficult assignments, and boys, as well as some family problems.

And, unlike most magic pennies, the ones in the box give the person who possesses them a curse that makes the opposite of her good wishes come true. However any bad wishes do happen.

As she struggles to cope with her curse Griffin tries to do good things, but that isn't easy because of the great tempting power of the magic pennies.

Will she become evil?

The Wish Stealers is an exciting story that keeps readers turning pages to find out what happens. And it may encourage them to choose good instead of evil.
Posted by Janet Ann Collins at 10:35 AM No comments: 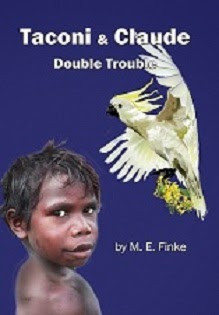 In Taconi and Claude the author, M. E. Finke, does an amazing job of carrying the reader into a different culture. The story is exciting, too.

Taconi is an aboriginal boy who lives in the Australian Outback in the 1950s. He's torn between two cultures since his father brought him along when he went to work on a homestead cattle station. (In America we'd call that a ranch. )

Taconi's father, who left the tribal grounds because of a conflict, badly needs the job of cook on the homestead and Taconi wants to help him get it. But the boy knows he must also experience the secret and scary tribal ceremony that will make him a man in the eyes of his father and tribe.

Can he find a blue kingfisher feather that will give him the luck he needs?

All through the book Taconi is accompanied by Claude, a cockatoo who always has the appropriate words for every situation. Like parrots, cockatoos can talk, but Claude's ability is both amazing and amusing.

Readers from nine to 14 years old will enjoy the story and learn about Australian culture and history at the same time.

Except for the extreme linguistic abilities of the bird, everything in the book seems realistic. The author includes Aussie jargon and describes the natural world, aboriginal culture, and life on the homestead in the 1950s naturally as the plot moves along.

I think this book is a winner.

Vonlai is only 12 years old when he and his family must escape the communists ruling Laos by fleeing to a refugee camp in Thailand.  But will they ever be able to leave the miserable camp and relocate to a free country?

In Escaping the Tiger Laura Manivong has written a realistic novel based on the actual experiences of her husband.

This book let me almost experience some history and culture I'd never known much about before, so it will be educational to young readers. But they'll enjoy it more for the dramatic portrayal of experiences the realistic characters had.

While the book shows a lot of bad things happening, there are also positive things like the believable relationships between the characters, who never quite give up hope.

This is an exciting, touching, and well written novel for Middle Grade kids.
Posted by Janet Ann Collins at 10:33 AM No comments:

It's so strange the way words referring to certain groups of people keep changing. We used to call people handicapped, which is sort of flattering because the best players in golf get handicaps. But that term, along with the terms "crippled" and "disabled," became considered offensive, so now we say "People with Special Needs"

When calling people "black" became considered insulting the term derived from Latin meaning the same thing was used, but now it's no longer acceptable. (Of course there were derogatory variations of both those words.) Today "African American" is considered the polite terminology, but it offends people with dark skin who don't have African ancestry, such as those from India. And what should we call people who do have African ancestry, but don't live in America?

But there's nothing offensive about calling people "healthy" and nobody objects to calling people "white," even though even albinos have pale pink skin and other "white" people have skin in varying shades of pink and beige. (Of course they're not considered "people of color" by some folks of other races.)

People only get offended by terms if they assume what the words refer to is something to be ashamed of.

It may not be easy to have physical limitations, but there's nothing shameful about being a person who has one. And it's time we got over thinking that belonging to certain races is something to be ashamed of. When we all get over our prejudices then we can stop changing our vocabulary.
Posted by Janet Ann Collins at 10:32 AM 3 comments:

Okay, you may be wondering what "gustation" means. It's the ability or process of tasting. And Bill Kirk's new book in his The Sum of Our Parts series is an especially delicious one. 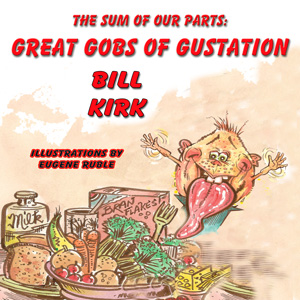 Great Gobs of Gustation is the eighth one in the series. It's all about our sense of taste.  The book is for kids and I'm a grown-up (at least on the outside) but it taught me lots of information I never knew before.

As in the other books in the series, the scientific information is presented in an amusing way with lots of rhymes. The amusing illustrations by Eugene Ruble add to the fun of reading it.

While the book is intended for Middle Grade kids, ages eight to thirteen, it's not very long and the rhymes could be read aloud to younger children.

In my opinion every school should have all the books in Kirk's The Sum of Our Parts series in its library because they'll teach kids a lot about human bodies and even reluctant readers will find them interesting. The scientific vocabulary is a bit difficult for kids who can't read well, though.

I've reviewed several of his other books in the series on this blog before and you can see those posts here:
http://onwordsblog.blogspot.com/2009/10/skeletons.html

I love books that take something familiar and put a different spin on it. The Wide-Awake Princess by E.D. Baker does that in a charming way.

This middle-grade novel is about the sister of Sleeping Beauty. She is immune to magic and goes on an adventure to find the prince who can awaken her sister and everyone else in the palace after they've been cursed to sleep for 100 years.

On her journey Princess Annie gets involved with other fairy tale characters and situations, all of which vary from the originals. And she has a lot of other adventurous encounters, too.

In spite of the familiarities, this book is completely original, creative and full of surprises. And the author has written of other magical books besides this one.

Clocks, Then and Now

Thousands of years ago people only judged the time by the position of the sun. It was either morning, noon, afternoon, evening or night. Hours, seconds, and minutes hadn't been invented yet.

Then someone invented sundials.

Eventually huge clocks that had to be wound up with keys stood in the hallways of mansions and chimed every hour, but poor people couldn't afford those.

Then smaller clocks appeared on mantels in homes and most men had pocket watches.

Wrist watches and alarm clocks were even later inventions.

But all those things had to be wound up every 24 hours or they'd slow down and stop.

Today we have wrist watches that run on batteries and our alarm clocks are electric. We can tell the time by looking at our stoves, microwaves, computers, and cellphones as well as clocks that hang on our walls or sit on shelves and bedside tables. Some of those set themselves automatically when moved to a different time zone or when Daylight Savings Time begins or ends.

However if there should be a major storm or disaster and the electric power was out for a long time, we're likely to be in trouble. While our electric clocks may have battery back-up, those batteries  and the ones in our watches would eventually run out of power. And signals to our cellphones won't work if the towers that send them can't get electricity.

It would take some major adjustments for us to dig out those old, wind-up clocks and watches or even go back to depending on the sun to tell what time it is. But that might not be a completely bad thing. Clocks run on electricity and they run our lives. Maybe we could all use a break from that.

Anyone want time out?

But there's something I've neglected to say: If I can love relatives who have different religious and political views and/or live thousands of miles away so I rarely or never see them, why can't we realize that all human beings are one family and learn to love each other? I'm tired of hearing about wars and rumors of war, people starving or being forced into slavery, and racial or religious prejudices. It's time to stop those things.

Thousands of years ago when humans encountered people who were different from themselves it was usually because the strangers were coming to take their territory and possessions. But, come on, we're not primitive people anymore. Isn't it time we realized we really are all one family? Why can't we learn to get along with each other?

Okay, that's my idealistic vent for the day.
Posted by Janet Ann Collins at 10:25 AM No comments: