Margot Finke has done it again. 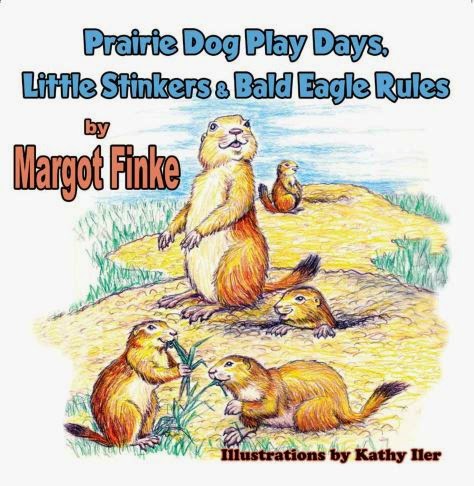 She's written another fun book that teaches kids about the natural world and it will be published soon. I'm lucky to get to see it before most other people and you're lucky to be getting a sneak peek at it.

While her other books are mostly about Australia, this one features creatures in North America.

As the title implies, the first section of the book, Prairie Dog Days, is about prairie dogs, but equal coverage is given to skunks and eagles in the sections called Little Stinkers and Bald Eagle Rules.

Written in rhyming style and sharing a lot about the youngsters in each species, this book will be a pleasure for kids to read or have read to them.

And they'll learn a lot, too. I even learned something I didn't know about the reason bald eagles are called that. (No spoilers; you'll have to read the book to find out.)

There's plenty of educational material at the end of the book for teachers and home schooling parents to use, and I think kids will enjoy all of that, too.

The illustrations by Kathy Iler are both charming and accurate.

I think lots of kids will love this book.

I've mentioned my grandfather several times recently, and I loved him a lot. However I must admit he was a bigot. Of course most people in his time were.

Gramp thought the minstrel shows he saw were accurate portrayals of African Americans.

He was prejudiced against Chinese people because he said the men had long braids, wore dresses, and took tiny steps like women.

And he told me men were better than women and boys were better than girls and there was nothing women could do that men couldn't do better. Even with regard to sewing and cooking the professional taylors and chefs were all men and women could only do those things well enough for their own families.

He was a product of his time and culture.

I'm glad we've come a long way since the 1800s that shaped his beliefs.

Maybe in the future no humans will be prejudiced against others. We can always hope.

I've been reading some Science Fiction books by H.G.Wells which were written in the 1800s. My grandfather loved his books, and also liked those by Jules Verne.

When Gramp was a boy back in the 1800s he lived in the Mission District of San Francisco.

One night, probably in the early 1880s he did something unusual. With the help of his younger brother he went outside after dark, lit a lantern, and tied it to the tail of a kite. Then he flew it in the dark sky above his neighborhood.

All over the area people came out and stared at the light moving in the sky. Nobody had ever seen anything like that before! They talked about it for days afterward.

Perhaps it was the world's first UFO sighting. At least it was certainly one of the first.

A book becomes a classic when it is read by lots of people for a long time. That time span may be decades long, but it's often a century or more.

As a writer I can tell you a lot of the classic books wouldn't have a chance of getting accepted by a publishing house today. Writers are told we must start in the middle of the action and avoid a lot of description, but older books often spend pages setting scenes before the stories actually start. I guess in those days people knew less about environments other than the places they lived in, so they really needed a lot of information to set the scenes.

However classics are classics because they're good reads and people still enjoy many of them today.

And lots of classics written for kids are still popular with children.

In my local library some books that were originally intended for adults are found in the Children's Section. They don't contain any material that's offensive, except for some racist and sexist stereotypes that were the norm back when they were written. Kids can learn a lot about how our culture used to be by reading classic books.

I'm currently reading The Complete Science Fiction Treasury of H. G. Wells. The anthology contains seven novels and is 760 pages long, so I may not finish it before next week. But his novels are certainly worth reading. I'm amazed at the creative mind that man had!

Have you read any classic books lately? If not, you might try some.
Posted by Janet Ann Collins at 10:27 AM No comments:

Did you know animals have language? Here are some examples:

Bees communicate the location of good nectar to each other by doing a kind of dance.

Birds use vocal sounds and gestures to communicate with each other. When a bird shakes all over that means, "finish" and many other creatures use that to mean the same thing. It's like shaking water off after getting wet.

Dogs and cats use all sorts of intonation patterns and body language to communicate. Unfortunately some canine and feline gestures have opposite meanings so, unless they were raised together, dogs and cats may not get along. For example, the dog's "Let's play" position is similar to the cat's aggressive threat.

Dogs can learn to count to five, probably because they have four paws and one tail. Once we had a brilliant dalmatian who learned to understand a lot of American Sign Language. I tried to teach her to count by asking how many treats she wanted and holding up a different number of fingers on each hand. I assumed she'd choose the higher number, but she didn't seem to be getting it. Then I realized she always picked the lower number because she wanted the game to continue. She did get it!

I wrote more about animal language and reviewed a book on that topic in a previous blog post. You can see it here:  http://onwordsblog.blogspot.com/2009/12/dog-language.html
Posted by Janet Ann Collins at 10:30 AM No comments:

Days of the Week

My last post was about the names of months, so I thought I'd follow up with this one.

Sunday is obviously named for the sun.

Monday is named for the moon, although the spelling is different.

Tuesday is named for Tiw. He was the Germanic god of war.

Wednesday is named after Woden, That's a Germanic version of Odin, the Norse god of war.

Thursday is named for Thor, who was Oden's son. He was the god of thunder and also of war.

Friday is named after Oden's wife, Frig. Her name sometimes gets confused with Freya, who was a Germanic godess of love.

(I got this information from the 1958 College Edition of Webster's New World Dictionary of the American Language.)

Labels: Days of the week

Long ago when the Romans developed the 12 month calendar the names we call, September, October, November, and December were based on their words for the numbers seven, eight, nine, and ten. The first month of their year was May, a name we've derived from Maia, their goddess of Spring. It was logical to start the new year when new life appeared.

The months alternated between 31 and 30 days. The Romans didn't plan for leap years.

The emperor, Julius Caesar, had the first Summer month of July named for himself. Then when Caesar Augustus became the next emperor he wanted a summer month named after him, but he didn't want it to be shorter than July because it might seem less important. That's why he took one day from the last month of the year, February, and added it to his own month of August.

Can you guess those men were both just a bit conceited?

If you want to remember the number of days in a certain month you don't need to remember the old rhyme, "30 days hath September, April, June and November," although that works well. Instead just remind yourself that the months alternate between 30 and 31 days, except for August and February.
Posted by Janet Ann Collins at 10:32 AM 1 comment:

Here's another book I like because it takes a creative spin on a topic. The Wish by Gail Carson Levine is a contemporary book with the features of a fairy tale.

Wilma is a misfit until a magic wish makes her the most popular gitl in her school. But she learns that popularity isn't necessarily always a good thing.

This is a fun story that will help young readers think about what really matters. I give it a thumbs up.
Posted by Janet Ann Collins at 10:32 AM No comments:

Addictions can ruin the lives of those who have them and the people around them.

People die from lung cancer and give other people asthma by smoking. Alcoholics and illegal drug addicts cause more problems in our society than I can count. Even medication prescribed by doctors can cause addiction, though the help they give may outweigh that.

I understand addictions work by creating chemicals in the brain similar to the natural ones are generated when people feel pleasure. Those false sensations may be more intense than the natural ones.

However the brain stops making the natural chemicals as a result of getting the others, so addicts can only feel pleasure when they're high or drunk. If people get into recovery their brains do start making the pleasure chemicals again, but it make take quite a while before that happens.

However there is one good kind of addiction. An addiction to reading!

Reading can stimulate all sorts of emotions, but those feelings are natural even when they're caused by reading fiction. A good plot may give the reader fear, excitement, frustration, relief, peace and joy, to name only a few feelings gained from books.

To be honest, I must admit that I'm a bookaholic and I have no intention of ever getting into recovery.
Posted by Janet Ann Collins at 10:30 AM 2 comments: