Today another author who shares my passion for encouraging kids to read will tell us about herself and her book. Here's what Katie Hines has to say:

In today’s society, what with X-Box, Game Cubes, Wii, and so forth, it is becoming more and more unusual to find a child who loves to read. When I was young, I learned to read, to visit worlds I’d never been before and never would, and to participate in others’ creativity. I sailed the high seas with “Mutiny on the Bounty,” I walked on the yellow brick road, I even went to Kansas! Reading turned into a lifelong passion, and I regularly learn more about other people and cultures, both in the form of fiction and nonfiction. These are things I wish every young person had a chance to experience in their lives. People who read are also more articulate, and eventually, I believe, become more productive in society. So I write with those ends in mind, but also because I love the process of creating a novel of my own. Writing fulfills a need in my life that nothing else has been able to fill, and I love the thought of helping to take young lives and show them new and exciting worlds—a world beyond video games--and meet their potential in life.

I have been writing on and off ever since I could remember. While in high school, I had several poems published in an anthology. That was following by a long period of non-writing in which I went to college, got married and raised two great kids. I picked up writing again in my late 40s, penning a memoir. From there, I went to writing a humor column for a local newspaper, a few op-ed pieces, and feature articles for another. During that time, I also wrote a middle grade urban fantasy entitled, “Guardian” which is due to be released in January, 2010. My short story, “My Name is Bib,” was published in The Loch Raven Review and is being expanded into a full length young adult novel. I am also currently working on several other writing projects. 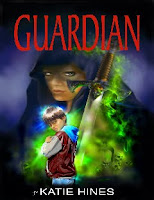 BOOK: A middle grade urban fantasy, “Guardian,” is due to be released from 4RV Publishing later in January.

Imagine you have made a secret promise that can lead you to the discovery of an incredible treasure and an ancient power. But in order to fulfill that promise, you must defeat an age-old sect that is determined to claim the treasure and power themselves.

Drew Newman is ready to tell his friends a secret, but two strangers burst on the scene, demanding an ancient, magical, book. He plummets into a world of uncertainty and fear as his home is invaded and he desperately tries to find the book.

Aided by the mysterious Jean-Paul, Drew’s search takes him and friends to Oak Island, Nova Scotia, where he continues his search. Joined with his Grandpa Ian and cousin, Zea, the tension ratchets up when Drew is kidnapped and he encounters the head of a sect that wants the book, a magical talisman and a treasure, for themselves.

Sprinkled with magic, “Guardian” explores the commitment of a boy determined to fulfill his promise to his mother and claim an uncertain destiny.

Thanks for your response to my VBT post. I like the idea of working together with other authors. We need to reach a wider audience, I believe. Any ideas how we can do that? Sincerely; Gary Eby, author of The Eby Way.